Following the Bank of England’s (BoE) unanimous decision to leave interest rates unchanged the Pound has been on a bearish run against rivals as economists push back their predictions for the start of the central bank’s monetary tightening cycle. Also prompting traders to move away from Sterling is the increasing uncertainty over the UK’s future in the European Union, as a draft agreement between Prime Minister David Cameron and European Council President Donald Tusk circulates ahead of the important February EU leaders’ summit. Although the December visible trade deficit was found to have improved, narrowing from -11.5 billion to -9.9 billion Pounds, sentiment towards the Pound has failed to turn more positive.

Safe-haven demand has continued to strengthen the single currency in spite of signs that the Eurozone economy is suffering the impact of global slowdown pressures. Greece is once again attracting concern as anti-austerity protests mount and investors becoming increasingly concerned with regards to the Hellenic nation’s ability to secure future bailout funds, leading to the Athens stock market’s worst day in more than twenty years. With the German trade surplus unexpectedly narrowing from 20.5 billion to 18.8 billion Euros the odds of the European Central Bank (ECB) opting for fresh monetary loosening measures in March have increased further. Nevertheless, market volatility is still holding the common currency up against many of the majors.

US Dollar (USD) Conversion Rate Lower ahead of Fed Comments

Friday’s Non-Farm Payrolls report was rather more mixed than traders would have liked, failing to shed particular light on whether the Fed will continue to take a more dovish view of monetary policy in the coming months. While the number of new jobs was lower than forecast this was contrasted by a dip in the Unemployment Rate and stronger-than-expected wage growth, muddying the waters and prompting the ‘Greenback’ to climb. Markets are awaiting greater clarity on the Fed’s outlook from Fed Chair Janet Yellen on Wednesday, with the US Dollar likely to cede back gains if it is signalled that a further rate rise is unlikely for the time being. 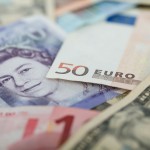 Despite the NAB Business Confidence Index holding steady in January, indicating that domestic businesses were not too disheartened by markets’ particularly volatile start to the year, the ‘Aussie’ has fallen out of favour with pundits. Although the Chinese stock markets are closed this week in observance of the Chinese New Year celebrations risk aversion has remained heightened, with mining stocks and base metals in a fresh slide. This has pushed the antipodean currency lower across the board as bearishness prevails.

After making some strong gains on the back of last week’s unexpectedly improved fourth quarter New Zealand Unemployment Rate the ‘Kiwi’ has returned to more bearish form, dragged down by the latest decline in risk appetite. With dairy prices in a persistent downtrend since the beginning of the year the outlook of the domestic economy remains generally less optimistic, encouraging speculation that the Reserve Bank of New Zealand (RBNZ) could be prompted to cut interest rates further in the near future.

While reports of a meeting between the Organisation of the Petroleum Exporting Countries (OPEC) and Russia have failed to yield any more solid support for a cut in oil production the price of Brent crude has remained above the $30 per barrel mark. A disappointing jump in the Canadian Unemployment Rate dented the ‘Loonie’ ahead of the weekend, suggesting the impact that downside pressures have been having on the local economy. However, a stronger Building Permits figure has seen the Canadian Dollar shored up on Tuesday in spite of the prospect of a prolonged global oil glut.

Top Reasons to be a Bookkeeper