The average cost of raising a child to high school age now stands at almost £100,000, according to the latest Halifax research.

Childcare is the greatest cost of raising a child in all regions, standing at an average of £309 a month. The monthly childcare costs in London and the South East surpass £350; higher than anywhere else in the UK, with the parents in the North West paying the least at £273 a month [see Table 1 below].

At an average of cost of £105, holidays are the second biggest monthly outlay, followed by food (£98), and schooling costs (£69) such as uniforms, class materials and trips.

Lots of dosh for little Londoners

The higher cost of living in the South is widely accepted, but it is notable that parents living in London appear to be paying a disproportionately greater amount for a number of child related costs than parents in other regions.

Richard Fearon, Head of Halifax Savings, says: “Regardless of where you live, the cost of raising a child is one of the most significant you will face. Understanding how each factor related to raising a child will impact you will allow you to budget and save for this spend and help to reduce the financial pressure that comes with a growing family.”

Broken down annually, children cost the most in the first year they are born (£11,573), with the amount reducing with each phase of childhood, until the age of nine, where it increases again slightly to an average of £7,662.

While monthly childcare costs remain the greatest expense at every stage, this drops significantly once a child reaches primary school age, falling from over £400 to less than £200 when children turn five years old.

Food costs are greatest for parents with children between the ages of two and four, where monthly spend on this tops £113. After childcare, holidays are the second biggest cost for parents of both babies and five to eight year olds, accounting for more than £100 a month.

Richard Fearon adds: “The initial costs of having children can easily take you by surprise if you’re not prepared. Furniture for a baby’s nursery is one example of where a large proportion of the annual spend will, in reality, occur over a much shorter period of time.”

Table 1: Monthly Costs by Region (Click chart to enlarge it) 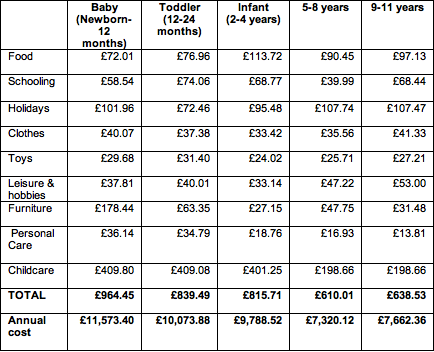 Amount of gold required to buy a house trends down