The latest GDP figures show an increase of 0.3 percent during the third quarter of 2017.

According to the data from the Office for National Statistics (ONS), the growth was driven by the service sector, which grew by 0.5 percent compared to only 0.1 percent in the first quarter of the year.

The retail trade, as well as film production and distribution were the largest contributors to service growth said the ONS, with the largest downward pressures coming from construction and manufacturing.

GDP per head increased by 0.1 percent during quarter 2 and has seen an increase of one percent compared to Q2 2016.

The graph below shows the quarter on quarter percentage growth and GDP figures. 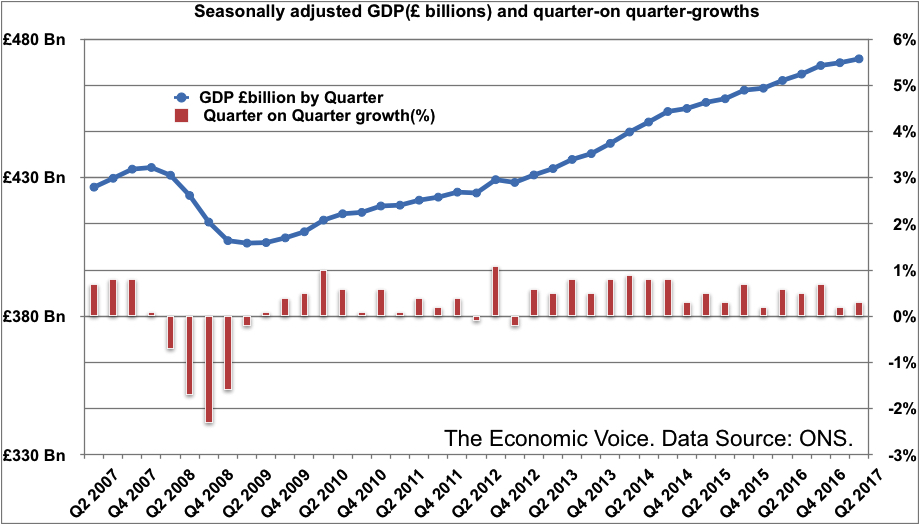 “Growth for the first half of 2017 is below expectations, and it follows continued data showing working families are being squeezed with wages not keeping up with prices.

“The truth is that the Tories’ austerity cuts have undermined working people’s living standards and weakened the UK economy.

“Only a Labour Government has a strategic plan of investment to boost growth, underpinned by our Fiscal Credibility Rule; which will help build a high wage, high skill economy that works for the many not the few.”

“We have weak economic growth presided over by a weak government, and this is likely to keep us near the bottom of the international growth league. Manufacturing has actually fallen by 0.5% due largely to a slump in car production, while construction has also fallen. Only the service sector has enabled us to have very modest growth.

“We are continuing to see the effects of a weak pound which has hit wages and consumer confidence. It has only been the spending of shoppers, based on consumer debt, that has kept the economy going. This lack of demand is due to ministers insisting on an extreme Brexit that is creating uncertainty and reducing investment.

“More fundamentally, this shows the need for a re-balancing of the economy and a proper industrial strategy to ensure that Britain makes high quality products that the rest of the world wants to buy.”

“Employment tribunal fees block workers from accessing justice.  The Government must scrap them in light of the Supreme Court’s judgement. This ruling is a victory for access to justice and common sense – workers’ rights are not worth the paper they are printed on if they cannot be enforced. Basic rights should not be the preserve of those who can afford to pay huge fees, and by bringing this case to court Unison have ensured all workers facing exploitation can bring a case against their employer.”

“Economic growth has remained sluggish in line with our expectations. We expect growth to remain lukewarm over the next couple of years, so providing businesses with certainty and stability has never been more important.

“A limited transition period as we leave the EU where the UK stays in the single market and a customs union until a final deal is in force, would help create a bridge to a new trading arrangement. It would give businesses the confidence they need to invest, expand and create jobs.”

"Today's data showed continued modest GDP growth of 0.3% in the second quarter, exactly in line with the estimate from our machine learning-based nowcasting model published earlier this month. This model has performed well in tests on historical data, but it is reassuring to see it also being able to predict new data.

"The main driver of growth in the second quarter was services, and particularly retail sales, which rebounded after an unusually weak first quarter. However, these comparisons were affected by the fact that Easter was in April rather than March this year as well as the boost to clothing sales from the hot weather in June. The underlying trend is for consumer spending growth to moderate as real incomes are squeezed by higher inflation.

"Outside services, both manufacturing and construction output fell in the second quarter. although in part this was just a reversal of the relatively strong growth in these sectors during the previous two quarters, reflecting their underlying volatility.

"GDP per head, which represents the broadest measure of average real income levels across the economy, has remained broadly flat throughout the first half of this year.

"Overall, we expect this modest growth to continue at a similar rate in the second half of the year, giving annual average GDP growth of around 1.5% in 2017. This will probably see the UK lag behind both the US and the Eurozone this year as the effects of Brexit-related uncertainty and higher inflation dampen growth here. But we do not expect this slowdown to turn into a recession."

“The government is relying on consumers for what little growth we’re getting. But the signs of strain are starting to show, with real wages falling and families getting deeper into debt.

“With businesses reluctant to invest, it’s clear the government needs to step up to the plate with a plan to boost investment, and to get wages rising again. And they should start by ending public sector pay restrictions and putting the minimum wage up to £10 as soon as possible.”

Brits are full of cheer as UK gets set to spend £16.5bn on Christmas