Following the Green Party’s strong showing at both the Local and European Elections on May 22, the Greens are polling at some of the highest levels ever ahead of the 2015 General Election.

Responding to the question “If there was a general election tomorrow, which party would you vote for?” in Lord Ashcroft’s latest polling (1), 5% of all respondents indicated they would vote Green. Of those polled who indicated they definitely intend to vote the Green vote rises to 7%. The Liberal Democrats scored 5% and 6%, respectively.

"This poll marks the solidifying of Green Party support after the European election. More and more voters are seeing that the Green Party offers the real, positive change that British politics and British society desperately need. 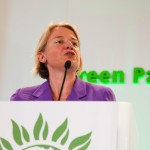 "Instead of the tired, old business-as-usual politics of the Tories, Labour and Lib Dems, and the prescription of fear and regression offered by Ukip, the Green Party is offering a plan for a society that works for the common good within the limits of our one planet.

"Advance reports of tomorrow's Queen's Speech indicate we'll see a further push on David Cameron's fracking fantasy, a promise to build expensive, pointless roads and a cut to building standards that will only increase fuel poverty.

"With one million people fed by food banks last year, one in five workers on less than a living wage and a financial sector where new instances of fraud and mismanagement on a giant scale emerge nearly every day, this government has done nothing to put our economy on a stable path, and is heading against the global tide in preparing us for a low-carbon world."