Osborne: a serious plan for a grown up country

George Osborne today said in his speech at the Conservative Party conference that he is setting out “a serious plan for a grown up country”::

• Sound public finances, with a new aim to achieve an absolute surplus in the next Parliament, provided the recovery is sustained, and grow capital spending at least in line with GDP

• Backing aspiration, with Help to Buy, support for small businesses and low taxes, including an ambition to freeze fuel duty for the rest of the Parliament

• Leaving nobody behind, with Help to Work and an end to the something for nothing culture in our welfare system

• Investing in the future, with support for infrastructure like High Speed 2, science and new energy sources such as shale gas

He argued that “what matters most for living standards are jobs and low mortgage rates and lower taxes”, and that “people know the difference between a quick fix con and a credible economic argument.”

He said that Britain is turning a corner, but that “it is not over. This battle to turn Britain around, it is not even close to being over.”

He explained why the Conservatives are the only party that will deliver an economy that works for all, and said: “We rescued the economy together. We’re going to recover together. And together, we’re going to share in the rewards.”

We will fix the roof when the sun is shining

George Osborne announced two new principles for the public finances under a Conservative Government to build a stronger economy for the future and avoid repeating the mistakes of the past:

• We will aim to achieve an absolute surplus in the next Parliament, provided the recovery is sustained

Both of these principles can be delivered by controlling day-to-day government spending and capping welfare, and will lay the foundations for sustainably lower taxes. 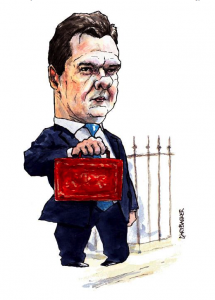 He announced that, “provided we can find the savings to pay for it, I want to freeze fuel duty for the rest of this Parliament.” At the moment the last of Labour’s planned increases in fuel duty, forecast to be almost 2 pence per litre, is set to happen in September 2014. Fuel prices are already 13 pence per litre cheaper than they would have been under the Labour plans we inherited

He confirmed that the Government will launch Help to Work, a new programme to help the long term unemployed back into work, in April 2014.

He confirmed that the Government will introduce a £1,000 transferable personal allowance for married couples and civil partners in April 2015.

And he confirmed that the Help to Buy mortgage guarantee scheme will launch not next year, as originally expected, but next week.