The government it seems wants to use the money of the army of small savers throughout the country by getting them to invest, war-time style, in government growth bonds.

George Osborne wants a way to be found for the nation’s savers to be encouraged to transfer their billions out of banks, building societies and investments and plough it into government growth bonds to be spent on infrastructure projects for the nation. The building of such things as bridges, toll roads and houses would kick-start the economy, or so the thinking goes.

Those savers that went for these bonds would be rewarded by good interest rates and tax breaks as well as the security(?) of having their money in the Treasury as opposed to a bank.

But of course if we strip money out of the already delicate banks, which are feverishly trying to recapitalise themselves to meet new regulatory requirements, we run the risk of plunging them into more crises.

Can you imagine the carnage if savers were suddenly offered a savings rate they could not refuse? Money would flow out of the UK banks faster than it is haemorrhaging out of Greek and Spanish banks.

Then how would the banks lend to our businesses when their coffers were empty of the required capital to back it up?

Also, would you trust any government to spend your money wisely? Can you imagine all the committees and quangos springing up designed to spend the money? And you can foresee the cronyism as contracts were handed out willy-nilly with inadequate checks and balances?

Then of course there’s the real risk (probability) that the growth generated costs more than it produces. Then we will have handed an even bigger burden over to our children and grandchildren. Don’t they have enough to bear already?

No this proposal, if true, is just yet more shuffling of deck chairs on the Titanic as we slide towards the deep.

The government gave money to the banks via quantitative easing and now wants to take money from the people to spend as it wishes.

This just proves that the government has now run out of real ideas, but only because there may be none left unless we change the entire structure of our economic, financial and political systems. But that of course would strip power away from the few that exercise it so would not be contemplated. This growth bond proposal shows just how far down the slippery slope we really are. Rocky times lie ahead. 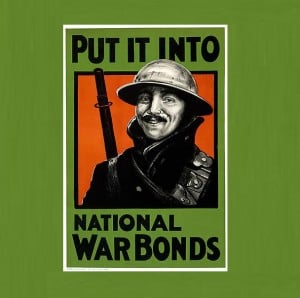