The Chancellor was said to be shocked’ at the level of tax avoidance amongst some of the richest people in the country.

George Osborne was shown some anonymised tax returns submitted to the HMRC by muti-millionaires as well as a confidential report, which showed that the richest had employed aggressive tax avoidance measures to cut their income tax bills down to an average of just 10% says the Telegraph.

The Chancellor told the newspaper that he “…was shocked to see that some of the very wealthiest people in the country have organised their tax affairs, and to be fair it’s within the tax laws, so that they were regularly paying virtually no income tax. And I don’t think that’s right.”

The HMRC report said that three main tax loopholes had been used by 20 people to reduce their tax by Â£145 million in just one year.

Some wrote off business losses in one of their companies against tax, some offset business or buy to let mortgages against tax and some claimed tax relief on charitable giving.

These are all of course legal vehicles for avoiding tax, but it will not sit well with the public that these loopholes can be used to reduce someone’s tax bill as far down as zero for some. Especially as he has only just reduced the top rate of income tax down from 50p to 45p.

But then again, what’s the difference between 45p and 50p if you’re collecting so little?

And surely the biggest ‘shock’ is that the Chancellor was ‘shocked’. How can this possibly come as a surprise to him? It hasn’t come as much of a shock to anyone else, especially to the army of financial / tax advisers out there and their wealthy clients. Many of those clients are dotted here and there about the Palace of Westminster and but a stone’s throw from No 11 Downing Street. 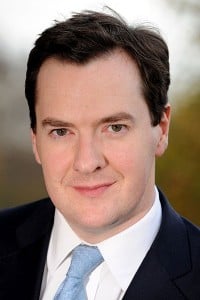 Image by hm-treasury.gov.uk [see page for license], via Wikimedia Commons