We are now bombarded with ‘sell your gold’ advertising. Bung your bling in an envelope and stick it in the letter box to us and we’ll send you cash they proclaim. 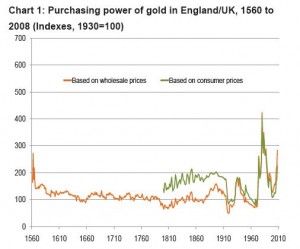 So while people who are strapped for cash sell their gold there are others desperate to buy the stuff. It now stands at just under $1,100 an ounce. It had previously been at a record high of $1,225 an ounce last month and 40% higher than a year earlier.

Gold in some quarters is seen as an inflation hedge, a sort of wealth preserver and starts to look attractive when other investments such as equities and government debt begin to look shaky. Especially if there are fears of a large rise in inflation. According to the World Gold Council, the relative ‘buying power, of gold is at a peak since about the year 1560 having only been beaten in the 1970s.

At the annual meeting of the World Economic Forum in Davos, Switzerland, (usually just called ‘Davos’) the subject of bubbles arose. When asked about asset bubbles Soros replied “The ultimate asset bubble is Gold.” This has been interpreted in some quarters as a declaration that it is time to get out of gold. But it could just as easily have been an observation on the nature and usefulness of gold compared to the price it always commands.

George Soros went on to say that reducing or stopping stimulus packages too early may threaten to send the world in to the second phase of a double dip recession. He was comfortable with the current levels of national debts and said there was probably lots of room for more in developed countries. This will come as some comfort to the UK Labour party, which plans to go to the country in the next general election on the pledge of maintaining support for as long as it is needed.

Thinking of Investing in Emerging Markets? Here’s What You Need to Know

Euro finds a few buyers ahead of ECB decision today