"Activity in the eurozone accelerated at the end of 2014 to boost hopes of an ongoing recovery in 2015. Aggregate quarterly GDP growth was better than expected in the fourth quarter, rising from 0.2% in the third quarter to 0.3%. For 2014 as a whole, the monetary union achieved 0.9% growth – the fastest rate of growth since 2011 and the European sovereign debt crisis.

Within the individual member states:

Germany and Spain both surprised on the upside as both recorded 0.7% growth on the quarter. Germany reported a rise in business investment, which had been depressed in previous quarters, probably in reaction to tensions between Europe and Russia. Germany also reported stronger net trade figures, as demand for its goods and services rise.

Meanwhile, France met expectations by reporting 0.1% growth, although the figures mean a slowdown compared to the 0.3% growth posted in the previous quarter. The French statistics office reported a slight increase in consumer spending, but a continued contraction in investment. Like Germany, France also saw a positive contribution from net trade, driven by a rise in export volumes. 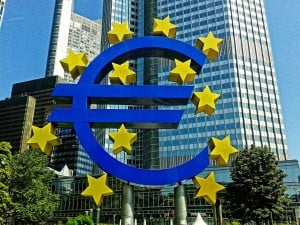 Finally, Italy beat expectations by not contracting, albeit thanks to numerical rounding. GDP did however fall by €72 million, which technically keeps Italy in recession.

Outside of the big four, both Portugal and the Netherlands recorded another strong quarter with each seeing GDP rise by 0.5%.

Finally, Greece, which had been reporting impressive growth at the start of 2014, ended the year by contracting (-0.2%). This means that there is a high chance that Greece will slip back into recession, especially after the huge uncertainty brought about by the election and subsequent bail-out dispute, which is ongoing.

Overall, 2014 ended on a more positive note. The improvement in net trade is particularly welcomed, and shows that the gradual depreciation in the euro is beginning to help boost external demand for eurozone exports. Also, more recent data showing rising consumer confidence and retail sales suggests that households are taking advantage of falling energy prices. We should see GDP accelerate further in the first half of this year, especially as monetary policy easing starts to filter through to the real economy. However, there are risks worth considering. Growth could disappoint if households and companies react negatively to the latest Greek crisis, and the continued tensions between Russia and Europe."

CBI: Budget Should Promote Investment and Exports to Rebalance Economy