I have spent most of the past week in Germany, meeting fund managers, catching up with colleagues and generally trying to avoid real work. And while there is more than an element of glad-handing on these trips, they also present a chance to find out what is really happening on the ground.

One of the most striking things I noticed is that surprisingly few Germans are that focused on or bothered about the euro crisis. This may reflect a degree of ‘crisis fatigue’ – I met more than one German who just wanted other countries to sell their assets and sort it out – but as the week went on I became increasingly convinced it was largely because Germans are actually more worried about something else. They are worried about the future of Germany.

To an outsider, this may seem odd. Germany has, after all, pretty much the lowest unemployment rate among major European nations, has weathered the recession and subsequent crisis reasonably well – at least, it is not back in recession right now – and has also managed to put its fiscal house in order. The German government is one of very few in Europe that will run a primary fiscal surplus this year, raising enough taxes to cover non-interest spending. It also has enviable trade links with fast-growing Asian economies and particularly China, and in the past week even weather that was too good, if anything. What is there to complain about?

Essentially, Germans are worrying about the future. Most of those in financial services are well aware that Germany is further down the ageing population route than the UK, and are concerned about the impact on the public finances. There were also a surprising number of complaints about crumbling infrastructure, youth underemployment, and concerns about growth outside of the traditional strong regions of Hesse, Bavaria and Baden-Wuerttemberg. One manager even noted wryly that ‘no one in the North has a proper job’. 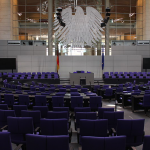 Allied to this were complaints about immigration, suspicions that domestic unemployment and inflation data were deliberately biased, concerns about the UK leaving the EU – honestly, I’m not making it up – and the poor state of political affairs. Merkel is pretty untouchable, but given her cautious nature this only reinforces the tendency for events to move very slowly, if at all, which frustrates many.

The upshot is that, despite its relative economic stability, Germany still has plenty of problems to sort out. Germans can often brush these issues under the carpet when talking about the homeland, but they are there nonetheless. The prevailing sense of concern also explains, in part, why Germans are so reluctant to really engage in sorting out the euro crisis – they feel they have enough things to worry about already. If anything, that makes me more concerned, as Germany’s introspection could lead it to ignore the still-real risk of euro break up. Muddling through hasn’t done a great job so far; and we should not expect any real impetus from Europe’s largest economy any time soon. Despite the weather, my trip turned out to be pretty gloomy after all.

Image By JesterWr (Own work) [CC-BY-SA-3.0 (http://creativecommons.org/licenses/by-sa/3.0)], via Wikimedia Commons