The Deputy Prime Minister, Nick Clegg, is expected to send a very clear message to the banks today telling them to not only get their balance sheets in order but also to get lending flowing to businesses again.

In a speech today at Indig02 to the Institute of Directors (IOD) he is expected to say that the country has a serious problem 'Because, if the banks aren't lending enough; you can't grow; our recovery is slowed.'

Part of his speech is expected to be dedicated to the subject of lending to business (economicvoice.com/forums/entry.php/188-Nick-Clegg-speech-to-IOD-25th-April-2012#axzz1t2A9WASi) and saying that using the excuses that new regulations designed to strengthen the banks as well as a lack of demand for loans from business are preventing them lending just won't wash.

'For the government's part, we are doing everything we can to increase the flow of credit and finance to SMEs.' He is expected to say.

But the Deputy PM is expected to acknowledge that government ministers '…cannot march into the banks and start taking their individual lending decisions for them'. But that the government would 'exert pressure' to get them to do so citing the way Project Merlin was set up by negotiation.

In his speech he is also expected to say that government has devoted 'huge resources' towards lending as well as changing the financial landscape to promote competition between lenders as well as unlocking sources of non-bank finance so giving business more choice.

He will also be calling for business to work with government to identify new channels of finance. 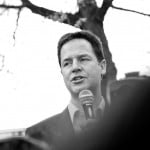 'Investments will be made over the coming months, to precisely the kinds of schemes Ive described and I'm issuing a call to all of you today: Tell us your ideal way to bypass the banks to unlock new channels of capital. How can we help rewire money to the small business world? Because, yes, we're rebuilding the banking sector to make it safe. Yes, we're intervening to make the banks lend. Yes we're supporting credit and investment ourselves. But the missing parts of this puzzle are competition and diversity. So tell us what would work for you.'

Save £50 EVERY day to retire in comfort