Girls Aloud's new single, 'Something New' has been leaked on the internet giving the British public prior warning of the dirge, which is about to hit our airwaves.

Yes that's right Cheryl Cole, Kimberly and errmmm what ever the rest of them are called have been back in the studio and the end result is the ironicallyÂ titledÂ 'Something New'.

The track is musically nothing new and starts off sounding like an early 2000's club remix you might find as a free give-away with a celeb mag mixed byÂ Can'tSyncDaTrack.

Vocally the song is predictable at chorusesÂ with the almost non-existentÂ monotoneÂ harmony-less chant covered withÂ auto-tunedÂ Â phrases with lyrics repeating how these girls are going take control and are leaders of the pack and warning the male members of the human race to look out because they want something new and are errmmm going to dance. 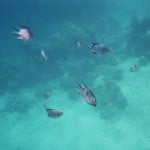 Well, there you have it!Â ShakespeareÂ and Milton need not worry that their contributions to the culture of humanity are about to be superseded in the pantheon of great works by the offerings of Cheryl and Co.

Some of the leaked video showsÂ CherylÂ Cole takingÂ centre stage making her trademark overlyÂ exaggeratedÂ swingingÂ hip walk to make up for the fact that whatever comes out of her mouth will in order to sound goodÂ requireÂ more processing power than the entireÂ Facebook server.

However whilst listening to the song in the bath with my ears under the water the song did take on a moreÂ transcendental quality and for that I will give 'Something New' an extra point in the review score.