Give boys the jab!

In a survey conducted by OnePoll, three times as many people said they would support giving the jab to boys than were opposed to it. The poll also showed the public’s lack of knowledge when it comes to the virus, with more than one in five men (21 per cent) under the impression HPV can be transmitted like a common cold.

Experts have forecast that the human papillomavirus (HPV), often transmitted via oral sex, will overtake tobacco use as the main risk factor for mouth cancer within the next decade. Despite the high profile case involving Michael Douglas, mouth cancer campaigners the British Dental Health Foundation remain concerned at the lack of awareness about the virus.

Mouth Cancer Action Month, run by the British Dental Health Foundation, launches on 1 November and aims to tackle the public’s lack of understanding about the disease, the risk factors and the signs and symptoms. Drinking alcohol to excess and poor diet as well as tobacco use and HPV increase the risk of developing mouth cancer.

Professor Margaret Stanley OBE from the Department of Pathology University of Cambridge, keynote speaker at this year’s Mouth Cancer Action Month Parliamentary Reception tomorrow (Tuesday 22 October), claims the number of HPV-related cancers in men are growing at an alarming rate.

Professor Stanley said: “the burden of HPV associated cancers is now almost the same in men as in women. Men face a significant and rising risk of HPV-associated disease, and without vaccination men remain at risk.

“It is not fair, ethical or socially responsible to have a public health policy that leaves half of the population vulnerable to infection. This is why men should get the HPV vaccine immediately.” 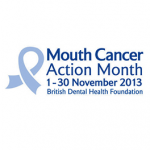 Dr Carter said: “The HPV vaccination of young men has already started in Australia and the British Dental Health Foundation is calling for the same to happen in the UK. A wealth of evidence and opinion in the USA suggests a population-wide HPV vaccination programme is now the best solution – for general public health and financial reasons. It is a debate that needs to be opened again here in the UK, as part of the on-going debate about the health and well-being of young people.

“In the UK around one in five cases of oral cancer are predicted to be as a result of HPV, yet our awareness and understanding of the virus is alarmingly low. Cases of mouth cancer have doubled in the last 30 years, coinciding with the rise of HPV, and strengthen the argument that there is not enough awareness of the risks we take when we have unprotected sex.

“The best thing anyone can do is regularly perform self-checks. Ulcers that do not heal within three weeks, red and white patches and lumps or swellings in the mouth are potential signs of the disease. Early detection could save your life, so if you are in any doubt, get checked out.”

Black Mountain Gold could be the world's finest Chocolate

Too much TV kills you