Nigel Farage, the UKIP leader, has claimed that the voices of the people of the British Overseas Territories are 'dangerously muted'.

To overcome this democratic deficiency he has suggested that they be allowed to vote for an MP to represent the territories.

There are fourteen overseas territories, which are parts of the former empire but did not acquire their own independence for one reason or another.

Together with the Falklands probably the most well known of these is Gibraltar, which has its own system of governance although being under the jurisdiction of the UK. The people of Gibraltar do though already form part of the South West England region of the UK for the purposes of electing MEPs into Brussels at European elections.

The responsibility for these territories is spread about different Whitehall departments but the people who live there do not have the same democratic say that residents in the UK do.

A move to give the Territories an MP would mirror the French System.

And as Mr Farage says, the people of the Overseas Territories have shown us loyalty over the years, shouldn't this be reciprocated?

There are over 250,000 in the fourteen territories. Compared to the UK with a population of 62 million and (currently) 650 MPs so having about 95,000 people per MP, the territories would still be under-represented with just one MP, but it would be an improvement on the current situation.

The fourteen Overseas Territories are: 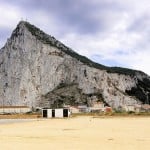 The Rock of Gibraltar by Keith Roper

Image by Keith Roper (The Rock of Gibraltar) [CC-BY-2.0 (http://creativecommons.org/licenses/by/2.0)], via Wikimedia Commons