After collapsing in early April, Gold prices have remained in a range between 1,490 and 1,325, as volatility collapsed during the formation of a consolidation pattern. Gold prices have been hindered by lackluster demand and a strong US dollar. Yields on the gold forward curve have made owning gold more expensive. The idea that the US Federal Reserve could taper their quantitative easing program put pressure on gold prices.

Economic data and central bank activity were the highlights for the week, and the factors driving the gold market. On Thursday both the ECB and the BoE met to determine their interest rate policy. Both central banks left interest rates unchanged, where the ECB discussed the extension of accommodative monetary policy if economic data continued to be weak [1]. The BoE saw its last meeting with Mervyn King who will be replaced by the BOC’s Mark Carney in July. 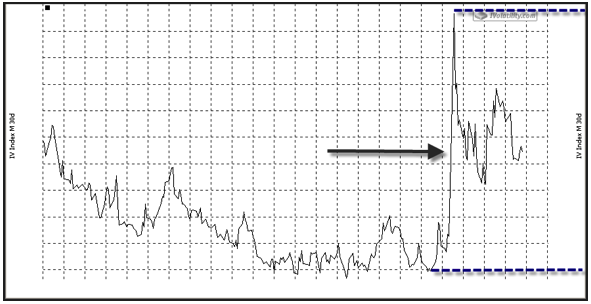 Implied volatility on Gold futures has consolidated in the upper end of a range created after gold collapsed in mid-April. The choppy movements of the implied volatility chart show that fear has moved back into the gold market and is likely to remain until the BOJ and FOMC are able to calm the markets.

The BOJ has created a windstorm of negative sentiment after Prime Minister Abe released information about his third arrow to Japanese economic success. The Prime Minister discussed an infrastructure plan that concentrated on power generation that, when combined with monetary policy and fiscal policy, would be the engine that would propel Japanese inflation.

The negative sentiment surrounding the Yen spilled over into the dollar markets creating a consolidative tone for gold prices. Gold was able to gain some ground as US economic data over the past week was unable to garner confidence. On Friday the Department of Labor released its May monthly non-farm payroll report.

According to the Bureau of Labor Statistics, non-farm payrolls increased by 175,000 jobs in May slightly better than the 169K expected by economists. Many analysts has brought their numbers lower on the heels of the worse than expected ADP private employment report released on Wednesday. Private sector payrolls increased by 189K while government employment declined by 14,000 jobs. The unemployment rates increased to 7.6% while the participation rate climbed by .1% to 63.4%. The average hourly work week remained unchanged at 34.5 hours per week. 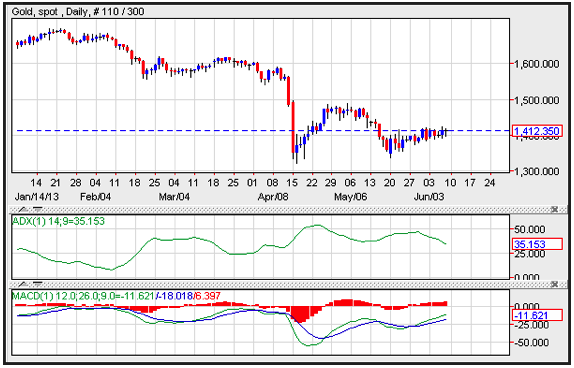 Gold prices gyrated after the government report on employment. Prices are experiencing a slow up trend after bottoming in mid-May. Momentum is to the upside with the MACD generating a buy signal in mid-May as the spread (the 12-day moving average minus the 26-day moving average) crossed above the 9-day moving average of the spread. The ADX which measures volatility is declining toward 35 after peaking out near 50 earlier in April. Yields on the 10-year note ticked lower, which could create headwinds for the dollar and help gold prices.