Good Employment News for the UK

The latest ONS employment figures for the United Kingdom will bring a pre-Christmas smile to the faces of David Cameron and George Osborne, especially as the leader of the opposition, Ed Miliband, had to acknowledge it during Prime Minister's Questions today.

The UK economy unemployment rate (The percentage of the economically active population aged 16 and over who were unemployed) fell by 0.3 percent between the May to July period and August to October to 7.4 percent. This is 0.5 percent lower than a year ago.

The economic inactivity rate (The percentage of people aged from 16 to 64 who were economically inactive) fell to 22.1 percent, which is its lowest since 1991.

Compared with a year earlier total pay for August to October rose by 0.9 percent and regular pay went up by 0.8 percent. 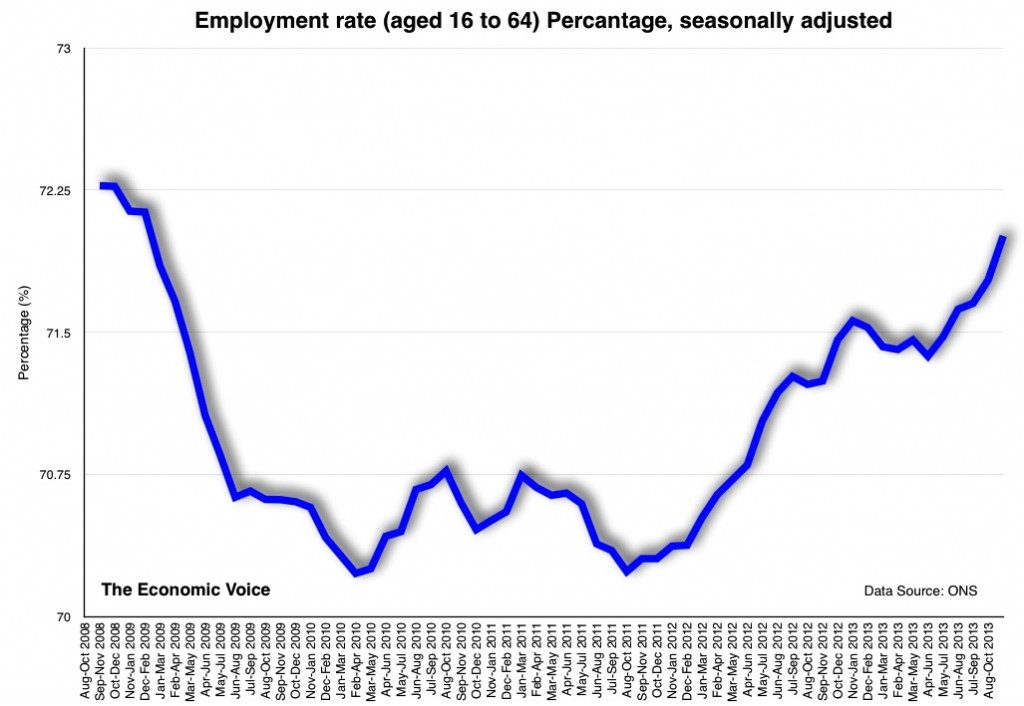 "The UK unemployment figures are exactly want the market wants to see. With unemployment rate now at 7.4% confidence continues to build that the 7% BoE threshold will be breached sooner. What is even more encouraging is the average earning figure, which beat estimates rising 0.9% 3m/y, coupled with yesterday's inflation figures means the squeeze on real wages is easing.

"Today's labour market figures are encouraging. A quarter of a million new jobs, and unemployment down almost 100,000, suggest the economy is finally in full recovery mode. It looks like improvements in the overall labour market are at last starting to trickle through and make an impact on the rate of youth unemployment, down 0.1% for the key 18-24 group. But now is not the time to be complacent: we will need many more months of  job creation before we can say that the UK's youth unemployment crisis is in full remission."

"The stronger economic growth we have seen recently seems to be increasing the speed of job creation. With employment rising in almost all regions, led by full-time jobs and across most sectors, real progress is being made.

"Our own employment survey shows this positive trend looks set to continue, with more than half of firms expecting to create new jobs next year, including more graduate and apprenticeship opportunities."

However, the TUC said that according to the latest labour market statistics, 136 local authority areas had more than 1,000 people who had been claiming Jobseekers' Allowance for more than 12 months in November 2013.

"These are undoubtedly positive figures, but we should not forget how far we still have to go to restore pre-crash living standards through better pay and jobs.

"The real test for the government is whether everyone will share in the recovery, not just a favoured few.

"Nor should we forget today that as more people find work, nearly 400,000 people across Britain are set to spend their second successive Christmas on the dole and desperate for work.

"There are still hundreds of employment blackspots across Britain, with more than 15,000 long-term dole claimants in Birmingham alone. Ministers cannot ignore these areas just because the picture in other parts of the country is looking rosier."

It's amazing the conversations that some parties are having around a hung parliament. I find it as exciting as an election campaign.