Although the headline employment and unemployment rates make good strong reading overall, weaknesses are still there as the two commentaries below outline.

• Real weekly pay amongst 16-21 year olds has fallen by nearly 40% since 2007 which is likely to have contributed to the rise in the number of young people living at home.

• The over 50s have made the largest net contribution (+1.1 million) to the numbers of people in employment since 2007.

• Despite this positive contribution, weaknesses remain – especially regarding the numbers of people aged 50-64 in unemployment which is at historically high levels.

• The recent rise in the number of unemployed women aged 50-64 can be partly explained by population change and rising economic activity perhaps in response to household income pressures and changes to the state pension age.

• While male unemployment has been falling since 2010, it has remained persistently high after rising sharply in response to the 2008 recession.

• For individuals that have been out work for a considerable period of time, government and employers must invest in the retraining necessary to reintegrate them into the workforce. 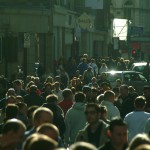 "While the latest figures on unemployment show a welcome fall in the headline rate, weaknesses remain. Unemployment amongst the younger generation has been persistently high and this has helped contribute to a substantial fall in real earnings making it necessary for an increasing number to continue living with their parents.

"There is also persistent unemployment (much of it long-term) amongst an albeit smaller contingent aged 50-64, some of which may be the result of structural changes to the labour market since 2008.  It is vital that those who are unemployed get the support they need in terms of training, reskilling and careers advice to help them re-join the workforce."

"Will he stand down or will he be sacked? I speak of the completely discredited Ed Balls after today's unemployment figures plummeted to 2.32 million, down 167,000, which at 7.1% is the lowest rate for five years. And if that's not enough to get him the red card from the opposition front bench, surely yesterday's backtrack by the IMF on the UK's predicted economic growth rate for this year, up to 2.4% (from 1.9%), must make for one nail too many in the coffin?

"Enough schadenfreude already . . . well maybe not, since the bad news for Labour spells great news for George Osborne and hundreds of thousands, if not millions on Brits, who over the next few years will benefit from the new and improved economic environment. An environment created as a result of the Government having the guts (was going to say 'balls') to hold its nerve on austerity, while all, including the good Mr Balls and the IMF, criticised from the cheap seats.

" I agree with David Cameron, it is a great day indeed when in excess of 280,000 more people are in work, the largest quarterly increase in history. Now all we need to do is Defuse the Skills Time Bomb before it's too late. And for those who still don't know what I'm on about that's the massive number of 16-24s who are currently out of work, a number that has stubbornly remained at 920,000 despite today's welcome news."

Levy Forecasts Near Zero Fed Funds Rate For Next 5 Years