Government Borrowing at Lowest Since 2008

The Office for Budget Responsibility (OBR) now estimates that the PSNBex will be £58.3 billion by the end of this financial year. The amount borrowed in May was £6.7 billion, which is £0.3 billion less than a year ago and the lowest May borrowing since 2007.

But every time there is borrowing it adds to the national debt and this keeps climbing.

The public sector net debt (excluding public sector banks) was £1,737.3 billion by the end of May 2017. This is equivalent to 86.5 percent of the country’s gross domestic product (GDP). This is both an increase of £121.6 billion in total and 2.9 percent of GDP compared to the same time last year. 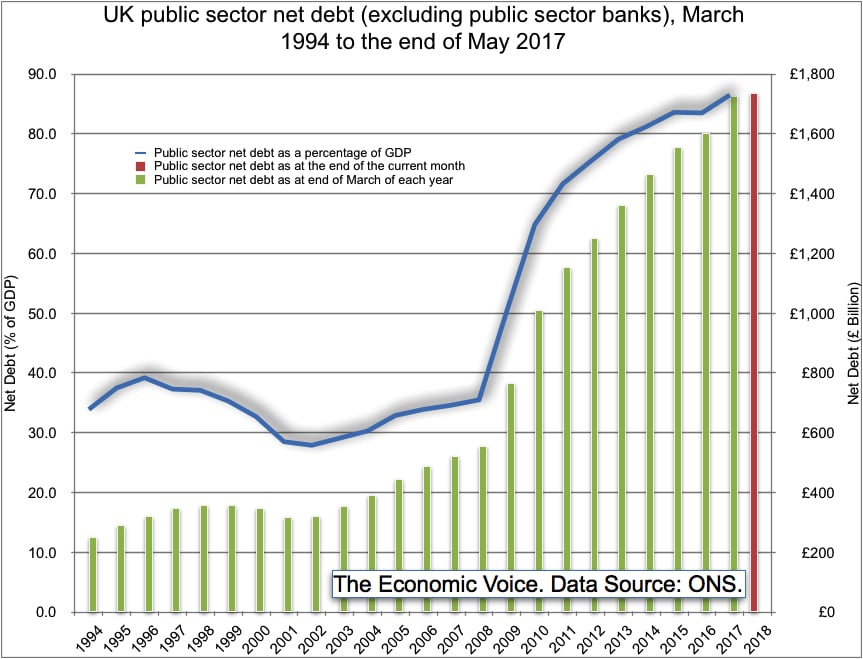 “These figures are a reminder of the chaos and negligence of both Philip Hammond and Theresa May over these past seven years of Tory economic failure; the deficit is still not been cleared as they promised it would be in 2015, and the national debt continues to rise.

"Regardless of their broken promises on the public finances they will continue to pursue a failed policy of austerity while handing out massive tax giveaways to big business and a wealthy few, yet enforcing spending cuts on our public services.

“However, there is no longer support in parliament for a continuation of their failed austerity policies, and if they cannot recognise this and change direction, then they should step aside and let Labour take charge.

"As only a Labour Government will set out a serious plan for the public finances with strategic investment underpinned by our Fiscal Credibility Rule, to help build the high wage, high skill economy of the future for the many not the few.”

“A triple dose of limited good news for the Chancellor as the public finances saw limited year-on-year improvement in May. April’s shortfall was revised down and the overall deficit in 2016/17 was also trimmed. Specifically, public sector net borrowing excluding public sector banks (PSNBex) was £6.7bn in May this year, compared to borrowing of £7.1bn in May 2016. Meanwhile, April’s shortfall was trimmed to £9.4bn from a previously reported £10.4bn. Completing the good news for the Chancellor, PSNBex in 2016/17 was trimmed to £46.6bn from £48.7bn.

“The public finances were buoyed in May by a 5.1% year-on-year increase in tax receipts and, in particular, record levels of VAT receipts for the month (up 4.3% year-on-year to £11.2b). May’s strong VAT receipts look to be the lagged impact of April’s spike in retail sales as a result of the later Easter and warm weather.

“It is very early on in the fiscal year 2017/18 and not too much should be read into two months’ data as the monthly public finance figures can be volatile and subject to significant revisions. While the performance of the public finances in April-May suggest that fiscal year 2017/18 could see a similar shortfall to the £46.2bn seen in 2016/17, a weakening economy is expected to take an increasing toll on the public finances over the coming months. The Office for Budget Responsibility forecast a shortfall of £58.3bn.

“While the public finances showed fractional improvement in the first two months of 2017/18, they are still in far from healthy shape. Pressure on the Government to recalibrate fiscal policy away from austerity, is likely to result in limited adjustments to the fiscal approach rather than radical changes in November’s Budget. The Chancellor appeared open to such an approach in his key Mansion House speech, but stated that he remains committed to the fiscal rules set out at the Autumn Statement, which lead to a balanced budget by mid-2020. However, there is some wiggle room within this.”

"Today's public finance data brought some good news for the Chancellor as estimated borrowing was revised down by around £2 billion in the last financial year and a further £1 billion in April.

“Taking April and May together, the deficit of around £16 billion was very similar to the same two months last year, whereas the OBR had forecast that borrowing would rise this financial year as one-off favourable factors unwound.

“Of course, it is very early days in this financial year, but the Chancellor will take some cheer from these figures.

“Looking ahead, however, the economy is slowing and considerable uncertainties remain around the outcome of the Brexit negotiations. At the same time, political pressures for higher spending on health, social care, education, policing, social housing and public pay more generally have increased.

“The Chancellor therefore still faces some tough challenges ahead if he is to meet his target of a balanced budget by 2025. But his interim target of getting the structural budget deficit below 2% of GDP by 2020/21 looks much easier to achieve and gives him some room for manoeuvre on tax and spending over the next few years."