In what will be disappointing news for the Chancellor, government borrowing rose unexpectedly in July, which may lead to the government overshooting its borrowing forecast.

Much of this is being put down to depressed tax receipts, especially in terms of corporation tax.

As can be seen from the graph below, despite talk of public sector cuts, the total debt pile keeps getting bigger at an alarmingly consistent rate, and interest gets paid on that. 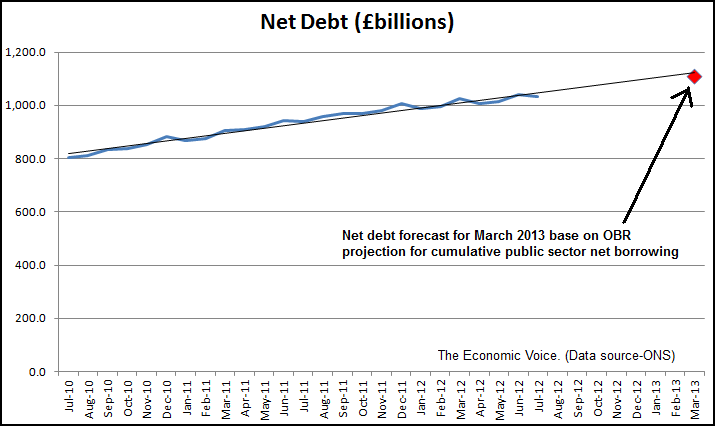 Nothing is set to change either. The red diamond at the top right hand side of the graph is where the debt figure will stand if the OBR’s projection for 2012/13 public sector net borrowing of Â£91.9 billion is maintained. That is not far off the overall linear trend line.

This means that we’ve got many, many years ahead of us before we see a surplus at which point the debt pile will start to be eaten into. Until that point the amount the country owes will just keep growing and with no increase in GDP that has got to be risky. Just look at the graph of debt as a % of GDP. 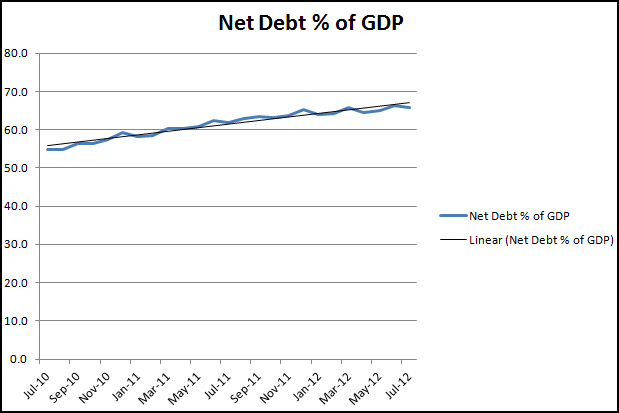 Nida Ali, economic advisor to the Ernst & Young ITEM Club, said “Yet another discouraging release for the public finances, which seem to be going from bad to worse with every successive month. Part of the increase in July's borrowing can be attributed to a fall in corporation tax receipts but, for the most part, the increase in borrowing is because of overall weakness in the domestic economy.

“The jump in government spending and decline in revenues is a genuine cause for concern. If this trend continues in the coming months, the government will be on course for a massive overshoot of the OBR's borrowing forecast, which has the deficit falling by Â£3bn in 2012/13. On the current budget measure, the deficit is already running over Â£11bn ahead of 2011/12 in just four months. As a result, even though there are three months to go before the OBR's next forecast, it’s looking like they will need to make some pretty hefty upward revisions to the projections for the deficit.

“We are optimistic that the growth performance will improve over the second half of the year, which could help to make up some of the lost ground. But on the flip side the economy must still navigate its way through a number of headwinds that could threaten an even worse outturn.”