And with the government's Care and Support Specialised Housing Fund having awarded its first round of funding this summer – much of which went to extra care developments – there is renewed hope for this innovative model of elderly care.

Having been hit by the ending of the government's Extra Care Housing Fund in 2010, as well as the general slowdown in the housing market, the latest research from healthcare expert Laing & Buisson suggests that the coming years could see a resurgence of activity in this combination of property and care.

Explaining that the growth of extra care housing in the mid to late 2000s had been driven for the most part by government funding, the report claims that this support for local authorities and their housing association partners led to the development of around 6,000 dwellings. However, since 2010 the volume of new extra care units has slowed significantly, thanks both to the cessation of central monies and due to a stale housing market which has meant that many older homeowners are unable to sell their properties in order to make the move to these kinds of facilities.

With last July’s revised funding stream though, report author Philip Mickelborough has commented that the concept of extra care as a real alternative to traditional residential care homes is once again a reality – bringing with it possible solutions to the social isolation which can sometimes come with the government’s other care service of choice for older people: homecare.

Reviewing recent events in this niche sector Mr Mickelborough welcomed the new funding, adding: ‘The original Fund was a great success, and we must hope that the government continues to support the concept of extra care’.

It is also hoped that the funding stream will help to counteract the impact of tighter bank lending practices which has made it hard for housing associations and private developers to borrow the cash required to create extra care units for older tenants.

The report also highlights another marked trend in the extra care sector: an increase in scheme sizes.

Mr Mickelborough said: ‘We do still come across local authorities who hope to run extra care schemes of only 20-30 units economically, but the focus of private and social developers' attention is more on stand-alone clusters of 50-60 dwellings or extra care villages with up to 300 flats, where the range of services and facilities on offer for older people can be extensive.’

In addition to a range of statistics including the existing size of the market, elderly population projects, the extent of council support for elderly accommodation and a comprehensive table of the grants awarded in July’s Care and Support Specialised Housing Fund Phase One, the report includes a breakdown of the extra care developments built across the past two years and a financial appendix on the major organisations operating in this environment.

Housing with care for older people by region and tenure in England, 2013 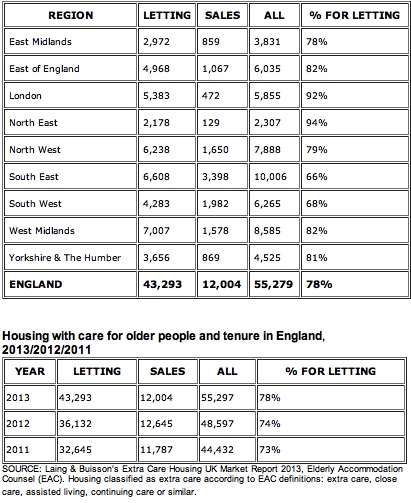