The government has launched a consultation on a proposed tax regime for shale gas, including a new shale gas 'pad' allowance. The 'pad' allowance is based on the highly successful existing field allowances for oil and gas production which are expected to help encourage nearly Â£14 billion of investment in 2013 – the highest on record.

The new allowance will reduce the tax on a portion of a company's production income from 62% to 30% at current rates.

As well as increasing the UK's energy security, shale gas could lead to the creation of thousands of jobs and to increased tax revenues from the oil and gas industry.

As announced at the Spending Round 2013, the government will also ensure that there is a robust scheme to make sure that local communities benefit from hosting shale gas exploration, with operators providing at least Â£100,000 of benefits per 'fracked' well site during the exploration phase – and no less than one per cent of overall revenues.

A recent report by the British Geological Survey revealed that there is more than twice as much shale gas in the north of England than there was thought previously to be in the entire country.

Alongside this, new guidance was published today that explains to industry and local communities how applications for exploratory shale gas developments should proceed through the planning system.

The guidance complements measures to help support the shale gas industry which has the potential to create many local jobs. It makes clear that local councils are responsible for determining shale gas planning applications and sets out the environmental, health and safety issues that need to be taken into consideration.

Decisions will be made by councils in a locally-led planning process.

"Shale gas is a resource with huge potential to broaden the UK's energy mix. We want to create the right conditions for industry to explore and unlock that potential in a way that allows communities to share in the benefits. This new tax regime, which I want to make the most generous for shale in the world, will contribute to that.

"I want Britain to be a leader of the shale gas revolution – because it has the potential to create thousands of jobs and keep energy bills low for millions of people." 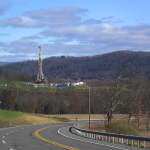 US Shale gas rig by Rurhfisch via Wikimedia Commons

"There is huge potential to boost local economies and create thousands of jobs if we tap into benefits of shale gas.

"Our new planning practice guidance will provide certainty for councils, for residents and for business. A locally-led planning process will be complemented by robust regulatory checks and controls to safeguard the environment and provide reassure to residents."

The government is minded to amend existing secondary legislation in relation to application requirements and fees for onshore oil and gas development. It believes that greater clarity in law will help provide certainty to councils and encourage investment.

The government will undertake a short consultation on our suggested approach, before putting their proposals before Parliament.

Have the courts been told to throw away the rule book when sentencing rioters and looters?

Want to Give Up on Picking Stocks and Just Play the Market? Here's How