Despite environmental concerns the UK government is planning to press ahead with the controversial practice of ‘fracking’ (hydraulic fracturing) to get at the huge amounts of energy thought to be locked underground.

In order to gain local support for the projects councils will be offered financial rewards in the form of a boost to the amount of the business rates they can keep going from the normal 50 percent up to 100 percent to accept tracking sites. It has been estimated by Whitehall that this could bring in an extra £1.7 million a year for each site a council takes on.

David Cameron has said there will now be an ‘all-out’ drive to promote fracking and the French energy giant Total said it will invest heavily in firms (reportedly up to £30 million) that have UK drilling licences (despite fracking not being allowed in France). The benefits to the economy of cheap energy will be substantial say fracking supporters but environmental groups have called this business tax arrangement a form of bribery.

Commenting on moves to enable councils to keep all business rate revenue from shale gas schemes in their area, Jane Thomas, Friends of the Earth Senior Campaigner, said:

"This latest Government move highlights the depth of local opposition to fracking and the desperate lengths ministers are prepared to go to overcome it.

“People are right to be concerned about the impact of shale gas extraction on their communities – especially as experts say it won’t lead to cheaper fuel bills.

"This move raises potentially serious concerns about conflicts of interest, if  councils that benefit from this money are also the ones who decide on planning applications from fracking firms in the first place. 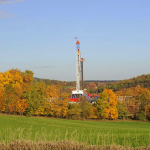 “The Government should be encouraging the development of Britain’s huge renewable power potential, instead of coming up with new incentives that keep the nation hooked on climate-changing fossil fuels.”

On the news that French oil and gas company Total is to invest in the UK's shale gas industry, she said:

“It's ironic that a French-owned company is seeking to drill the UK for shale gas when it’s banned from fracking in France due to environmental concerns.

“Fracking is not the solution to our energy problems – experts say it won’t lead to cheaper energy bills and the Government admits shale gas and coal bed methane development could have significant impacts on local people and the environment.

“The best way to build an energy system that doesn’t cost the earth is to invest in a comprehensive energy efficiency programme and develop the UK’s huge renewable power potential.”

Three Variables to Consider Before Investing in Gold