• Competition for jobs at record low, with 1.39 jobseekers for every advertised vacancy in April, down 38% year-on-year

• Salaries soaring in the Science sector, with advertised salaries increasing 7.1% year-on-year in April to £36,249

• More vacancies than jobseekers in eighteen UK cities, but still more than 10 jobseekers per vacancy in Salford, the Wirral, Sunderland and Rochdale

• Competition for graduate vacancies falls significantly year-on-year, but still 30 jobseekers per entry-level vacancy in April, and over hundreds of applicants per vacancy at leading graduate recruiters

A recovering graduate jobs market has helped push the number of advertised job vacancies up by a fifth over the last year, according to the latest UK Job Market Report from Adzuna.co.uk.

Total advertised vacancies grew 19.8% year-on-year in April, supported by a flurry of opportunities for new grads and growing science and manufacturing sectors, as well as a burst of activity in the self-employment and part-time sectors. There were 823,081 advertised vacancies in April 2014, compared to 687,167 in April 2013. It was the third consecutive month in which total vacancies have topped the 800,000 mark.

Andrew Hunter, co-founder of Adzuna, explains: "This month's labour market reads like a recipe for success. There are far more job opportunities than twelve months ago, with graduates in particular benefitting as employers begin advertising for far more staff. Salaries are showing signs of improvement, which is helping improve household finances across the country. And the science sector is roaring back into life, contributing to both production and employment levels. An influx of self-employed and part-time roles has further bolstered employment numbers, leading to a healthy glow across much of the jobs market."

Advertised salaries showed their first signs of growth in seven months in April, climbing 1.2% on March to reach £32,185.

Andrew Hunter, co-founder of Adzuna, clarifies: "The salary upturn comes not a moment too soon. Real wages have been falling consistently since the recession. But now they are beginning to claw their way back upwards, sped along by declining competition between jobseekers, which is encouraging employees to raise salary stakes to attract the best staff."

There were 15,732 advertised graduate vacancies in April, up 37.2% from 11,466 twelve months ago, as employers increase their focus on hiring fresh young talent in response to a pick-up in economic optimism.

Salaries for the newly qualified followed suit, with advertised graduate wages increasing 1.0% month-on-month to £24,105 in April, although as yet they remain 3.8% lower than in April 2013.

Andrew Hunter, co-founder of Adzuna, explains: "The grad market is growing as employer optimism blossoms. As competition for jobs continues to fall, employers are beginning to invest more and nurture talent from the bottom up – that can only be a good thing for graduates. Initiatives such as the new engineering A level due to be introduced in September 2016, will help to encourage more of our youth to study subjects in which talent is particularly short – and provide a stream of future workers."

"However, despite an increase in entry-level vacancies, competition still remains fierce amongst the top graduate employers, with over 160 Class of 2013 graduates battling it out for places on the country's top grad schemes."

In response to the historic graduate vacancy slump, more and more new entrants to the workforce have been going it alone. The number of graduates who set up their own companies increased 75% over the last four years alone.

Andrew Hunter, co-founder of Adzuna, elaborates: "In response to tough competition for entry-level roles during the post-recession slump, many grads were forced to take on lower-skilled jobs. Some graduates showed great innovation and drive in opening up their own businesses. But there are now also far more employer-led opportunities opening up for new grads, giving more options to work in larger, established companies with better benefits."

"Geographically, however, the grad market remains narrow. Nearly half of all grad opportunities are focused in London and the South East. With graduates already forking out for higher tuition fees, forcing them to relocate to the expensive capital in order to find work may be a stretch too far for many. The government need to encourage grad opportunities in other areas of the country, to give grads more options."

A booming science sector has helped to support the month-on-month salary growth. Advertised science salaries have risen 7.1% to £36,249 in the twelve months since April 2013.

Andrew Hunter, co-founder of Adzuna, explains: "The UK is re-establishing itself as a centre of science and technology, and many employers are on the look-out for new talent. But fresh blood in these sectors is hard to come by. The science and technology sectors fell out of favour as subjects to study during the recession, which has led to something of a talent drought. Employers are competing to attract new workers, and are upping salaries to try and gain an edge over their competitors.

"The recent media buzz around the proposed take-over of AstraZeneca has moved the spotlight back onto the pharma sector, and the wider scientific circle, and could help encourage more aspiring high-fliers to consider science as a career option."

On the other end of the scale, sectors continuing to hold back the salary recovery include the retail sector, in which advertised salaries fell 12.6% to £27,138 over the year to April, to an average of £27,138. However, the retail world has been particularly volatile recently, and retail salaries could be set to pick-up soon.

Salaries across the nation

Salaries increased in every region of the UK between March and April, with the exception of Scotland (-0.7%) and Wales (-0.1%).

The West Midlands (+2.2%) showed the strongest salary growth in the month to April, helped by a surge of business investment in Birmingham – the largest regional city outside of London. The North East (+2.1%) was the second best performing region in terms of salary growth in April.

Despite the monthly pick-up, average advertised salaries were still falling 4.5% short of April 2013 levels. And the most recent ONS statistics reveal that CPI inflation has risen slightly to 1.8% suggesting a rise in real wages may be slower to realise than many economists have estimated. Factoring in inflation, average salaries have fallen by £2,179 in real terms over the last twelve months. 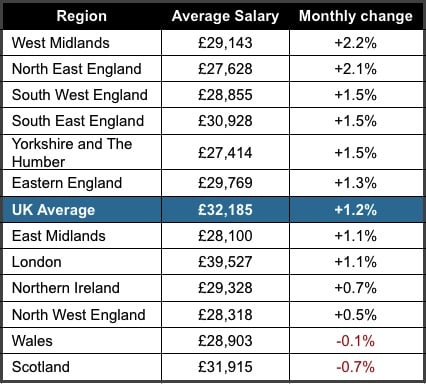 Where are all the jobs?

There was more than one vacancy available for every jobseeker in eighteen cities within the UK in April. Aside from Scottish business hub Aberdeen, each of the top ten cities to find a job in the UK were in the South, with Cambridge boasting the lowest competition for jobs – offering six vacancies per jobseeker.

But Northern towns also showed signs of recovery in April. Competition for jobs fell in each of the worst ten cities, leaving only four towns with more than ten jobseekers competing for every vacancy. Rochdale, the fourth worst city in the UK witnessed a particular revival, with the number of jobseekers per vacancy falling to 11.92 from 13.06 in March.

Andrew Hunter, co-founder of Adzuna, elaborates: "The list of worst places to find a job in the UK is dominated by traditionally public-sector reliant Northern towns, which were hit particularly hard by recession budget cuts. But the regional picture is mixed. Manchester for instance, is establishing itself as a centre of science and engineering. Industry giant BAE Systems recently relocated several thousand highly skilled engineering jobs to the Greater Manchester Area, which has had a knock on effect on surrounding towns including Rochdale, reducing competition for jobs and easing some of the pressure on jobseekers."