Events in Grangemouth this week have highlighted the continued shift in power between workers and owners. Back in the 1970s, when strikes were commonplace and nationalised industries were more widespread, workers really did hold the country to ransom in some instances. With Thatcher breaking the back of the unions in the 1980s – in no small part due to picking her moment carefully – the balance shifted back towards bosses. But under the previous labour government, strikes were generally few and far between – one reason the petrol dispute sticks in the memory is precisely because of the impact it had. This time, though, bosses seem to have put a a gun to workers’ heads.

The intricacies of ownership often vary for larger firms, but in this case the ties are pretty clear – Ineos, the owner of the Grangemouth petrochemical plant, is essentially owned by Mr Jim Ratcliffe. And Mr Ratcliffe has form. He financed many of his initial acquisitions using high-yield debt – exactly the kind of borrowing that puts companies on a shaky footing. In 2010, he then relocated Ineos to Switzerland in order to cut his tax bill. Now, he seems to want to renegotiate previous agreements with workers.

Although some accounts suggest the dispute started over the treatment of a union official, this is a red herring. Large companies do not decide to close 800-job operations on a whim, so the move to close the plant was coming for some time. If reports of the Grangemouth chairman ‘smiling’ when he made the announcement to shut the plant are true, the move may also have been enjoyed.

What the firm is essentially doing here is asking workers to accept lower pay, or take redundancy. In a larger local market, with a range of employers, the latter might be a viable option. But precisely because the Grangemouth plant is pretty large in a relatively small community, Grangemouth is not a million miles away from being a ‘monopoly’ employer, at least in terms of the 25% share that is used as a metric by some competition authorities. Workers simply have no choice.

There will be those who say that these cuts are painful and necessary – and indeed they might be on a forward-looking basis. But the decision to change pensions as well means that the company will now default on the previous contractual promises that it made workers. Pensions are essentially deferred pay – which incidentally is one reason why contractors can seem to earn more (because they don’t have pensions, their pay is higher). Negotiating and agreeing the wage you will pay in the future is one thing; but reneging on pay you already owe is another thing entirely. This is the kind of behaviour that is rightly criticised when aggressive private equity houses take over businesses and rewrite implicit and explicit contracts. 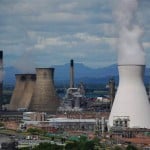 But here’s the real difference this time around – will anyone stand up and say this is wrong? The union has already acquiesced, realising that it has no option if it wants to save jobs (and members). Everyone else seems to take it for granted that Ratcliffe deserves to stay on his yacht, and can take his money where he wants. Public opinion seems to have fallen into line behind money talking, regardless of the consequences. Any notion of ‘responsible capitalism’ seems to have been lost.

If I’m right, then the labour share – how much of national income or value added goes to workers, rather than owners – might not matter anymore. At the same time, that will have very real consequences for inequality, because it will widen even more swiftly. The simple reality is that rich people save more, and own more, than the poor. And with Osborne cutting taxes for the rich, the UK looks set to become even more divided between the ‘haves’ and the ‘have nots’. Even to a jaded economist like myself, that feels like a very bad place to be.