Today European policymakers have been congratulating themselves on the successful restructuring of Greek government debt. The move – probably the largest orderly sovereign restructuring the world has ever seen – has been keeping traders and investors on tenterhooks for several weeks now. But the news that over â‚¬170bn of debt will now be written down to a more manageable size frees the way for the IMF and eurozone to enact a second bailout of the Hellenic Republic, this time to the tune of â‚¬130bn. But, although a nasty shock has definitely been averted, this is far from the end of the story.

For one thing, the restructuring has arguably come a bit late. The whole programme has been referred to as the PSI – private sector involvement – since inception, and this distinction is critical. Support from the official sector has already be restructured, via lower borrowing costs and longer maturities, but fundamentally the IMF and other eurozone countries are not being asked to take absolute haircuts on the headline amounts that they have lent Greece. And because these entities have lent Greece so much since 2010, the 70% cut in Greek liabilities to the private sector has less impact than it would have done two years ago.

This means that Greece’s debt burden is still substantial, and years more of austerity lie ahead. And even though the Greek authorities have made good progress – coming close to a primary surplus last year, in places – they are trying to hit a moving target. Austerity is sucking the life out of the economy, which has now been shrinking for several years. And without growth, there is little chance that financial markets will view Greece’s debt burden as sustainable any time soon. The Greek people have much more pain ahead of them.

For all that, the Greek deal does set important precedents in other ways. The private sector now knows that, should Portugal spiral out of control as well, it will take a hit. European politicians are not prepared to insulate creditors from the fallout. And provided Greece keeps trying to cut its deficit there is probably a more-than-decent chance that the IMF and eurozone may rollover the monies that Greece owes them, if they really need to. To have the best chance of success, the Greek government should now press ahead with a vast liberalisation agenda, to give potential entrepreneurs access to previously closed professions and markets. Thus far, progress on this front has been much slower than for deficit reduction, and the authorities need to step up a gear. 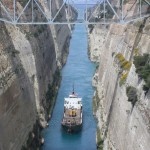 Greece still has a long and narrow passage to navigate

More to the point, European politicians will probably also claim to have successfully limited the financial fallout from Greece. While a default two years ago would have cut Greece’s debt to a much more manageable size, it could also have crippled several European banks, sparking a systemic crisis that would make the 2008/9 recession look shallow in comparison. Today the default has passed almost without a hitch, as banks and other institutions have had time to get ready for it. Ultimately, that may be the real story of this whole sad affair – Greece subjecting itself to years of pain and upheaval for the sake of its fellow Europeans. But I suspect few in Berlin or Helsinki would share that view.

Is the 1% UK inflation rise good news or bad news for investors?