Even though private holders of Greek bonds have been forced to take a ‘haircut’ (loss) on their investments this has been deemed to not be a ‘credit event’ that would trigger Credit Default Swaps to pay out.

When investors take on debt in large quantities it is normal for them to insure themselves against the bond issuer failing to pay out when they are due to be redeemed for their face value.

This is done by purchasing Credit Default Swaps (CDS) so that if the bond issuer doesn’t pay then the CDS provider takes the bonds and the bond holder gets the face value of the loan.

With the Greek debt position, private investors only (not organisations like the ECB) are taking a 53.5% haircut or loss on their investments, but because these losses were considered as ‘agreed’ therefore ‘voluntary’ it was initially decided that it wouldn’t trigger CDS insurance payout.

But this created a sort of two tier debt system (finance.fortune.cnn.com/tag/greece/) where the governments and the ECB are holding ‘senior debt’ and the private investors hold ‘junior debt’ even though they are in reality holding the same asset.

In the case of Greece there is exposure to about $3.25 billion covering over $200 billion in outstanding debt, an easily manageable situation where some of the money lost could be recouped for private investors if there was a level playing field. 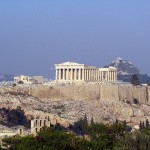 So a couple of questions were fired at the International Swaps and Derivatives Association (ISDA) to make a ruling. But the 15 members of ISDA's Europe Middle East and Africa Determinations Committee ruled unanimously today that no credit event has happened (yet), so no CDS payout. It did not however rule out any future developments that might trigger one as events were still ‘evolving’.

But the problem exercising many peoples’ minds is, if regulators can rule out insurance payouts on government debt, whether holding debt becomes too risky (or at least more risky than holding corporate bonds) and also whether any CDSs they hold are worth the paper they’re written on and if not why bother buying them in the first place?

A good way to destroy the CDS and sovereign debt markets it seems.

A nice explanation can be found on the video here.

Image by LennieZ from nl [GFDL (www.gnu.org/copyleft/fdl.html) or CC-BY-SA-3.0 (www.creativecommons.org/licenses/by-sa/3.0/)], via Wikimedia Commons