Today felt different. On the trading floor in 2010, there were plenty of nerves but still a general sense that the Europeans would come up with a deal for Greece. In 2012, haircuts had been widely trailed as 'Private Sector Involvement' and passed relatively smoothly. This time, it feels different.

Ever since the Tsipras government decided to roll up June's IMF payments into one lump at the end of the month, events have taken on a surreal tone. To be clear: it is not normal for the head of the IMF to say she wants to talk to adults. It is not normal for 'partners' to resort to name calling in public.

Ultimately, the ECB has the power to trigger Grexit via suspension of its Emergency Liquidity Assistance (ELA), which would result in the collapse of the Greek banking sector. But it is also absolutely clear that the ECB does not want to do so; central banks are supposed to be the guardians of their currencies. 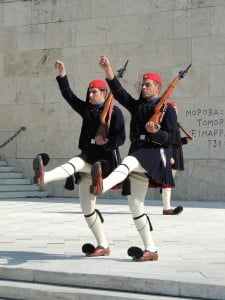 Today's decision on ELA bought enough time for the emergency meetings politicians have set up on Monday; but if a deal is not done there, it is not clear that one can be done. I don't believe that deposit freezes would solve much; they would just prolong the painful slide of the Greek economy into chaos.

A deal could still be done. But I am increasingly worried that Tsipras does not want one. I worry that he would rather leave his mark on Greece by changing the course of its history forever than cede ground on 1/2% of GDP. Europe, for its part, is fed up of being harangued for giving Greece money, and seems to think it could cope with the fallout from Grexit. Neither side could really claim an 'accident' if it happens; but they may both regret the consequences after the fact.

All this leaves me worried that we could be looking at exit from Tuesday, if Monday's meetings fail. But I hope I'm wrong.