Europe is still in the highlight of world economic news. Greece’s ASE stock index was down 4.2%, reaching a three week low, three-year Greek bond yields rose 1.91% points to15.95 on Monday, March 9, on the other hand Euro continued its downward spiral ending the week at 1.04941, as it edges closer to parity against the USD. The fall in Euro could be attributed to concerns about the pace of talks with Greece, following European Finance ministers’ piling pressure on Greece, urging Greece to allow inspection of its books and making good on the terms agreed to in its rescue package, as the country tries to avoid running out of cash in a few weeks from now.

Apparently, Greece’s creditors are willing to compromise to help solve Greece’s financing issues. According to a Greek government official Mario Draghi, European Central Bank President personally tried to convince Greece to heed to calls for technical experts to come and continue scrutiny of their financial situation.

It just appears that even after the agreement between Greece and EU finance ministers, Europe is still not convinced that they can fully trust Greece. 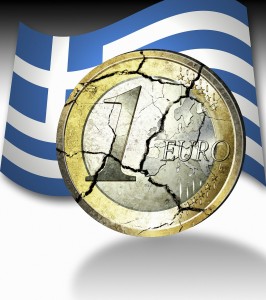 The New Greek administration run by the left wing Syriza party is positive that the deal will be finalized and the remaining bailout money will be received. Yanus Varoufakis, the Greek Finance Minister told reporters in Brussels that they are doing their job properly and “…they (EU finance ministers) will do their job,”  he then continued that “Our job is to start the process which is necessary for the European Central Bank to have confidence.” Working with its Euro-zone creditors seems to be the only rational course of action for Greece at this moment which passes via truly reforming Greek economy with long-term economic perspectives.

What about the rest of Europe? Would the Greek crisis spill to the other troubled European countries?

The newly launched Quantitative easing program by the ECB seems to be protecting the rest of the European region from a spillover effect from events in Greece, according to ECB President Mario Draghi said on Wednesday.

"We also saw a further fall in the sovereign yields of Portugal and other formerly distressed countries in spite of the renewed Greek crisis," Draghi said in a conference in Frankfurt.

What is the way forward?

The Greek seem to see clearly now that a “Grexit” is hardly a viable option, neither is a debt default while staying in the euro. Therefore, working with its Euro-zone creditors seems to be the only rational course of action it has to reform its economy.

Elsewhere in the world, investors are carefully evaluating the Chinese economic developments as the prime minister announced the beginning of the new Chinese economy. If the new economic plan does not work out we may see China going into a bigger recession than the EU.

More stimulus maybe required to boost the Asia largest economy, as activities are behind target as monetary easing shows few signs of traction following the country’s Industrial output, investment and retail sales growth missed analysts’ expectations in both January and February. The growing U.S recovery may help influence China’s new economic plans as it seeks to transition to increased domestic consumption, as against debt-fueled infrastructure spending.  The Yuan is currently at a two year low against the dollar.
For now once again we are going to be looking for monetary policy divergence and how the USD evolves out of these processes as a leading world currency.

Cameron and the elusive EU referendum