Now that the likelihood that Greece will be leaving the Eurozone is increasing many Greeks are starting to withdraw Euros from their banks.

Rueters reports that this has been going on for years but that the rate of withdrawal has increased markedly over the last two days [1].

On Monday â‚¬700 million had been taken out and on Tuesday bank sources told Reuters that money had been withdrawn at about the same rate again.

There does not seem to be a panic though, Reuters cites President Karolos Papoulias of Greece saying in the minutes of a political meeting that the Greek central bank head, George Provopoulos, had told him that “…there was no panic, but there was great fear that could develop into a panic”.

Generally the Greeks want to stay within the Eurozone but are also unwilling to square up to the austerity measures that come along with it.

If Greece remains within the Eurozone then these withdrawals would prove to be unwarranted.

But if Greece looks like it will be forced out then very quickly we could see people queueing up outside Greek banks to try and get their money out in Euros or whatever currency they can before it is converted into devalued Drachma. The Greek government would have to move very swiftly to counter a potential run on their banks, which could prove ugly for everyone.

Both Angela Merkel and the new French president, Francois Hollande, were at pains to declare their backing for keeping Greece within the Eurozone. But the differences between the German austerity v the French tax and spend approaches showed. And with the Greeks going to the polls again the future looks very uncertain indeed.

We are all truly between a rock and a hard place, not just the Greeks. Austerity (for others) sounds good to the well-heeled purists and tax and spend for growth sounds good to those who would suffer under austerity.

Austerity will bring with it untold numbers of victims. 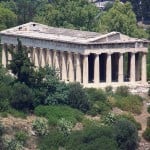 But tax and spend for growth may be worse. All the growth proposed so far needs loads of future money – debt – spent to achieve it, more bail out money for some like Greece. But what if the growth achieved does not equal the debt spent to get it?

Just look at the recent boom years. While we were wallowing in the boom an even larger pile of debt was accumulating. It was a debt fuelled boom where the growth achieved did not pay for the debt that came with it. To put it bluntly, we haven’t paid for the last lot of debt based growth yet so how can we afford any more?

If the only solutions we have are for more debt fuelled growth then the future looks grim indeed as it will all have to unravel at some point.