Greek debt out of control with interest rates approaching 200%

Whilst the mainstream media talk about whether Greek will default on its debt, the knarly chart below paints a very different picture. What it shows is that the Greek Government is now paying almost 200% interest rates on its one year bonds, which it uses to borrow money to fund expenditure. Interest rates on the two year bonds are also almost 80% now, rebounding sharply from the temporary dip caused by the last tranche of bailout.

With such loan shark level interest rates how does the Greek government continue to pay? It is clear to see, with GDP falling over 4% so far this year (see Reuters), that this "investment" is funding an economy which is leaking like the Titanic.

But of course the Greek government isn't paying. No, the funding is coming from all of the EU countries, particularly Germany. But now the IMF is involved, and Britain is committed via treaty to paying 4.5% of any bailout! This could initially be 5bn Euros. One would have thought it treasonous for one government to bind future governments to funding such nonsensical piles of debt. This is the equivalent of giving piles of liquor to a drunk who threatens to sober up!! Forget a referendum on whether we are in the Euro, I want a referendum on whether "our" government should hand over billions of our money to the IMF and EU to literally throw into a financial black hole, because our businesses here are desperate for that money to be given to them via emergency tax cuts. Particularly in light of the fact that Greece entered the Euro based on Goldman Sachs cooking their books to make it appear that they satisfied the entry requirements (see the Independent).

If this is the reality of global socialism, I do not like it. Unelected bureaucracies deciding to use our money to bail out fraudulently accumulated debt to protect a foreign currency? 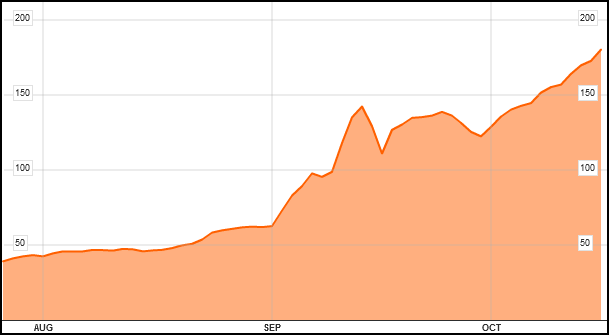 Greek 1 yr Graph from {a href="http://www.bloomberg.com/quote/GGGB1YR:IND/chart"}HERE{/a} - click image to enlarge

Currently, the EU and IMF are having a great time using this crisis to wield influence and destroy national sovereignty, creating their coveted New World Order. But what happens when interest rates hit 300%, heck, why not 500%? And what happens when bond yields soar in Spain, Italy and Portugal to mention just a few suffering similar crisis? At that point, a vast majority of all tax payer money will be funnelled directly into a raging furnace just like in third world countries. This is why free markets traditionally allow default and bankruptcy to liquidate fraudulent or misallocated debt and resources, allowing capital to be re-employed to productive uses.

For everybody's sake, Greek must immediately default on all its debts, re-instate the Drachma and institute far reaching tax cuts across its economy to re-ignite it. Brits could then enjoy cheaper holidays in Greece and cut price olive oil, funding their economy in a way that benefits both nations. Austerity simply won't work if all of the cuts merely divert tax payers money from services towards servicing unsustainable debt payable to banks such as Goldman Sachs, who cooked Greece's books (is this just a bigger version of liar loans for mortgages?). The lenders have to accept that they made a mistake, or that they got found out, and take their losses on the chin. That justice would also end the moral hazard, because bailouts only encourages lenders to make similar mistakes in the future just as handing more liquor to a drunk encourages them to drink more alcohol. For the sakes of ourselves and Greece we must immediately withdraw from the EU bailout fund, end our automatic funding of the IMF whilst calling for an immediate referendum on our continued support for propping up the fraudulently obtained debts of foreign governments with hard earned tax payers money and instead institute the tax cuts our economy here desperately requires.

Roger Waters will tour The Wall