The Green MP for Brighton Pavilion is calling on Labour to support her Bill to bring the railways back into public hands.

Caroline Lucas’ Private Member’s Bill calls for train services to be brought back into public ownership when franchises expire, or when companies break the terms of their franchise agreements. With the Bill’s Second Reading due on 18 October, she is writing to the Shadow Transport Secretary calling on Labour to support it.

And ahead of this week’s RPI figures, used as the basis for fare increases, Lucas is inviting passengers who use services to and from Brighton and Hove to sign a new petition against “the extremely high cost of tickets for services provided by Southern and First Capital Connect, which are often overcrowded and unreliable.”

Caroline Lucas, Green MP for Brighton Pavilion, said: “People in Brighton and Hove, and across the country, are sick of paying a fortune for train services which aren’t good enough.

“We have to put up with unreliable services, overcrowding, and some of the highest fares in Europe. Since the railways were sold off, the cost of train travel has risen by 17%. And in recent years, the cost to the taxpayer has more than doubled. Meanwhile, shareholders are reaping huge profits.

“Passengers and taxpayers alike are being ripped off.

"By taking back individual franchises when they expire, or when companies fail to meet their conditions, the Government could save over Â£1 billion a year every year. This is money that could and should be reinvested in services, and also used to reduce fares. 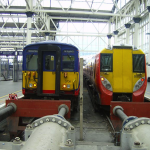 “It’s encouraging to hear senior figures Labour figures acknowledging the chaos and waste caused by privatisation. I hope they will support the growing campaign for Britain’s railways to be brought back into public hands.”

The petition, published today, asks the House of Commons to urge the Government to ensure rail fares are reduced, to introduce minimum standards for on-train facilities, and to deliver a rail system “designed as a public service rather than one primarily run to generate a profit.”

Last year, a report by Transport for Quality of Life estimated that Â£1.2bn of public money has been lost each year as a result of privatisation. The Shadow Transport Secretary has called for East Coast main line to remain in public hands, but Labour is yet to set out a clear position on privatisation. A Government review of fares was due to be published last month but has been postponed.

Image – By ACBest at en.wikipedia [Attribution], via Wikimedia Commons