Green Party leader Natalie Bennett has offered her party’s support for protests against the further significant rise in rail fares [1]. British rail fares have been hiked for 10 years in succession and our trains are now the most expensive in Europe.

Natalie said: “Households already struggling with fast-rising rents, food prices and energy costs are going to suffer a new blow. Many households that consider themselves middle class, who only a few years ago were comfortably off, are now struggling, finding themselves able to make ends meet only by extreme economies ranging from skipping meals to unhealthily cutting heating.

“Many others have already been priced off the rails – forced into convoluted, long bus journeys or into their cars when they’d rather not be, adding to congestion on our roads and increasing our greenhouse gas emissions.”

Natalie added: “All of this only highlights the sense of renationalising the railways, to save us the Â£1.2 billion additional costs caused by the fragmentation and profit-taking in the current system, as the Rebuilding Rail report last year showed.

“Privatisation has also given us a fragile, unreliable system in which fewer than 70% of trains run on time, i.e. within a minute, the measure used in much of the rest of Europe.” (See BBC here.)

There were, however, broader issues, Natalie added.

“Britons have the longest commutes in Europe, reflecting the concentration of job opportunities in larger centres, and high house prices, rents and the shortage of social housing.

“We need to cut the cost of train travel, but we also need to reduce people’s need to travel.

“This is one more reason why we need to look to rebuild strong local economies, promoting small businesses and cooperatives that are growing food, making the goods we need and provide services on a local scale.” 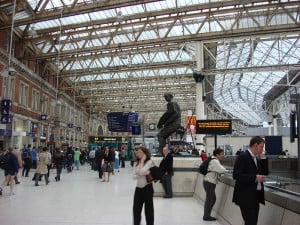