The Green Party has called for a public debate after the government's announcement that it will be spending on Â£350 million on design work for a Trident nuclear deterrent replacement.

It also comes at a time when the use into the future of the Faslane and Coulport facilities in Scotland could be called into question should the Scots vote for independence in 2014, which in itself would call for a massive strategic rethink.

The Green Party has condemned the government’s announcement of further spending on nuclear submarines as pre-empting a decision on Trident – and preventing a full public debate on the UK’s nuclear deterrent.

Defence Secretary Philip Hammond announced yesterday that the government will spend another Â£350m of taxpayers’ money on ‘design work’ for a ‘future generation of nuclear submarines.

“The decision about whether to renew the UK’s Trident weapons system isn’t due until 2016. But pre-emptive spending on the ‘nuclear deterrent’ is gathering pace, with at least Â£2bn already being spent on making enriched uranium components, high explosives and warheads.

“While schools, hospitals, police forces and other services face savage cuts, BAE Systems and Babcock are being handed taxpayers’ money for a vast defence project that hasn’t even been signed off yet – and one which many believe is outdated, and incapable of addressing modern security challenges.” 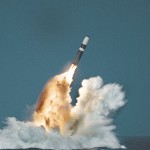 The Coalition agreement, signed by the Conservatives and Liberal Democrats in 2010, delayed a decision on whether to replace Trident until 2016, after a government study into alternatives has been completed.

But the Ministry of Defence announcement this week has been interpreted by many as a sign that the Coalition is committed to a Trident replacement.

Caroline Lucas is leading calls for the Trident replacement option to be dropped, highlighting serious economic and moral challenges.

She said: ‘There is still a huge public debate to be had about replacing Trident. The economic and moral questions are clear.

“With the total cost of replacement likely to come in at an eye-watering Â£100 billion over the next 30 years, can the UK afford such an extravagance? Is a Cold War deterrent really the right solution for our defence needs in the 21st century?

“And what message would replacing Trident send out to the rest of the world about our country’s commitment to nuclear disarmament?”

UK Cops warn Romanians not to come unless they have work