The Green Party has today called for tighter regulation of food production with increased transparency over methods of production after The Guardian's five-month investigation uncovered a series of hygiene failings in the chicken industry.

Green Party Animal Welfare Spokesperson, Caroline Allen commented: "It is no surprise that the food industry is at the centre of another scandal, this time over chicken. This Government is completely in thrall to the food industry and as such is falling to get them to meet the most basic regulations. Nothing has been learnt from the horse meat scandal.

"It is clear that the massive cuts made to the Food Standards Agency must be reversed. It is a false economy, risking our health by leaving food safety to the market and the food companies who gave shown again and again that they cannot be trusted. The Coalition Government continues to learn and do nothing in the face of yet another food scandal. 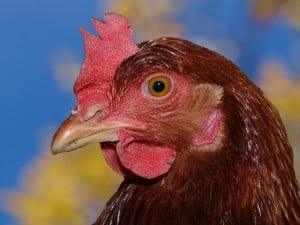 "The Green Party is calling for much tighter regulation of food production with increased transparency over methods of production. CCTV in slaughterhouses is a must. However with the high prevalence of food borne disease such as campylobacter, increasing antibiotic resistance, high levels of obesity and related diseases we believe we need a much more fundamental change in the way we produce and market our food.  The massive players in the food industry have for too long been able to produce food that damages our health, animal welfare and the environment, while we pick up the true cost of this 'cheap' food. Our food chain is fundamentally broken. Radical change is needed."

The Green Party has included the use of mandatory CCTV in all slaughterhouses to highlight abuses and dereliction of duty within its policies.

Driving fines to increase by £15 to fund victim compensation