Green MP Caroline Lucas, Deputy Leader Will Duckworth and Green Councillors across England and Wales have added their support to firefighters on strike today over pensions and public safety.

Under national government proposals, firefighters in England and Wales are expected to work until the age of 60 – despite more than half aged between 50 and 54, and two-thirds over the age of 55, unable to meet fitness standards for fighting fires.

More than 12,000 firefighters are taking part in protests against the measures, which, according to the Fire Brigades Union, will lead to many losing thousands of pounds through reduced pension payments.

He said: “I’m 59, and a former teacher. I have foot problems and one of my knees is giving out. My job was far less physically demanding than that of a firefighter. But the Coalition is demanding people who have spent their entire lives at peak physical exertion and risking their lives and health to continue to risk everything until the age of 60. It’s scandalous, and it must not be allowed to happen." 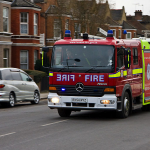 Blue and Twos on Ballards Lane by Martin Addison

Councillor Phélim Mac Cafferty, a former representative on the East Sussex Fire Authority, said: “Firefighters do physical, dangerous work, risking their lives to save others. But the government’s idea of thanking them for a lifetime of public service is by putting firefighters and the public in danger by forcing them to work when the government's own figures say they are less able to.

"We join the Fire Brigades' Union and appeal to the government to protect public safety and ensure that these crucial workers receive fair pensions.

“Greens are proud to show our solidarity with firefighters as they face the blame for the Coalition Government's austerity measures."

Protect Your Tech From Burglars