Investment in clean, green renewables – NOT hydraulic fracturing ('fracking') – is the way forwards for energy policy, says The Green Party.

The Coalition Government has said that Britain has potentially more shale gas than previously thought as it announced guidelines and financial incentives for the extraction of the reserves.

A report by the British Geological Survey (BGS) says that the Bowland Shale, covering 11 counties in the north of England, contains about 40tn cubic metres of gas. The BGS study is an assessment of ‘gas in place’ – recoverable resources are likely to be significantly lower. Chancellor of the Exchequer George Osborne said that fracking promised to be a “real boon for our economy for many decades to come.”

The Green Party is opposed to fracking methods of extracting oil and gas from conventional and unconventional wells.

In response to the publication of the report, Green Party MP Caroline Lucas asked the House of Commons for an urgent debate on fracking.

“Ministers should spend more time working out how to keep fossil fuels in the ground and less time squandering taxpayers money on tax breaks for shale gas that scientists say we simply cannot afford to burn if the government is to keep its commitment to limit global warming to below two degrees celsius.”

"Campaigners have understandably, and rightly, concentrated, on concerns about the local environmental impact of fracking – the multiple heavy vehicle movements, the consumption of water, the high risk of contamination of aquifers, the earthquakes – but it's important to also recognise that the independent Committee on Climate Change has said that Britain might not be able to frack and meet its legally binding emissions targets.

"More, fracking as part of George Osborne's 'dash for gas' threatens to lock Britain into a high-cost energy future.

“We know what the 'fuel' for wind farms and solar panels will be in the future – nothing. By contrast most experts expect the cost of gas to continue to rise, the only question is by how much."

Only one well has been drilled and fracked in Bowland Shale (by Caudrilla Resources). The fracking was suspended after the exploration triggered two small earth tremors in the Blackpool area. The government has issued 176 licences for onshore oil and gas exploration. 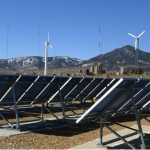 The Green Party’s energy policies include:

* Whilst fracking practices exist we are committed to minimising their potential impacts on humans, animal health, and the environment.

Giving up caregiving is associated with increased depression