Members of the Green Party will be “auctioning” students in protest against government plans to privatise the student loans book.

The Party argues that this decision by the government could plunge students into unmanageable debt as there will be no safeguards preventing a private owner of the loans from more than doubling the interest rates currently being paid.

Benali Hamdache, co-Coordinator of the London Green Party and one of the organisers of the event said:

“Can you put a price on student’s future? This government certainly thinks so. Thousands of students – whether currently at university or now graduated – have relied on student loans to help them pay for their education and help them build their future. This government, which is hell-bent on squeezing ever last penny out its public, is now quite happy to whip that support out from under students’ feet and leave them with unmanageable debts and rocketing repayments. It’s unbelievably cruel.”

“We’ve organised the auction to highlight what these plans mean for past, present and future students – that the government is selling-off their prospects to the highest bidder. We encourage anyone who is angered by the government’s heartless proposals to join us in our protest on Friday 18th October.” 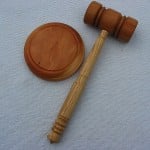 Gavel and Stryker by Keith Burtis

The Party argues that in addition to be being callous the government’s move is also pointless. The sell-off of £900m worth of loans accrued between 1992-2012 is expected to make only a fraction of that amount when sold and the government is being forced to offer sweeteners to encourage companies to bid.

The Student Loans Company was set up in 1990 as a means for the government to support students through university. The privatisation of the student loans book was announced in June 2013 and has led to a backlash from student groups and campaigners across the country. The Green Party’s “student auction” will be taking place outside the Department for Business, Innovation and Skills from 1pm-2pm on Friday 18th October.