Londoners deserve better than a smog alert when the weather warms up, says the Green Party, which is calling for more to be done to meet clean air targets and tackle the rising public health problem of air pollution.

Warm spring weather this weekend triggered a smog alert in London. The warning from the UK Department of Food, Environment, and Rural Affairs extends to a forecast of moderate particle air pollution all week with risk of high particle air pollution. UK estimates suggest nearly 30,000 people die prematurely each year as a direct result of exposure to air pollution.

“I love the sunshine but wish it didn't always seem to be accompanied by a toxic smog cloud, resulting in watering eyes and a sore throat, or worse.

“Mayor Boris Johnson's failure to act over our dangerously poor air quality is seriously affecting Londoner's health as well as risking millions in fines from Brussels. Greens are pushing for much faster action, so we can enjoy these sunny days unspoilt by toxic air.”

The London Green Party has heavily criticised the Mayor’s cost-cutting plans to close vital air monitoring stations across the capital. 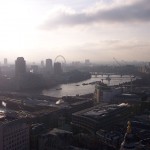 “Primary traffic emissions are known to play a key role in air pollution incidents. London authorities must get serious about making London a safer place for people to cycle and walk. Only then can we create a more liveable and less vehicle-dominated city.”

The Green Party is the only party with workable policies in place to tackle air pollution and create a cleaner, happier and healthier London. As part of a concerted effort to clean up London’s air, the Green Party is calling for 20mph speed limits across London, a tightening up of Low Emission Zone standards and proper enforcement (including a ban on idling for parked cars) and the urgent creation of great walking and cycling routes across the city to improve public health and reduce the need to travel by car.