What on earth possessed Dartmoor National Park Authority to send an enforcement notice to Gerald Cleave, an innocent Devon farmer whose land was taken over by travellers against his wishes?

This situation reported in the Mail is just preposterous. Three years agoÂ  a convoy of travellers turned up at Mr Cleaves' farm and decided to stay. In the intervening period they have turned the area into a wasteland and even had the cheek to recently erect metal panelling and fences around the area.

To add further insult to injury they have even diverted their mail and catalogue orders to his farmhouse.

Mr Cleave has used all the legal means at his disposal as well as asking the travellers to move on all to no avail. In fact the police warned him not to take matters into his own hands.

‘I’m at a complete loss as to what to do. I’ve tried everything legally within my powers. I could forcibly remove them but might face prosecution. I’ve asked them to leave and they won’t listen to reason, what more can I do? It’s the law of the land and the reason why this country has gone to pot’ said the 68 year old Mr Cleave. 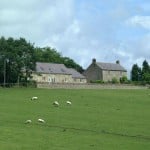 It turns out that the Dartmoor National Park Authority has five options in these cases, one of which is to prosecute the owner for potentially Â£20,000. But why go down this route when they also gave the options of prosecuting the actual occupiers or imposing a court injunction to imprison them?

A notice now adorns the gate to the fenced off area saying 'We live in this property. It is our home and we intend to stay here'. The travellers then had a noisy party.

What a country we live in. We can quickly move on or arrest people who might just possibly get in the way of a perfect fairytale royal wedding, but we will not protect ordinary law abiding peoples' rights.

You can bet every dollar you've got that these travellers would get a swift kick from the authorities if they had the temerity to park anywhere near Kate and Wills.

Nigel Farage Sticks To His Guns Over EU Foreign Policy

Predictably the Bank Rate was Held at 0.5%