Britain and China have today agreed a series of steps that will both cement London's role as a global offshore hub for trading the Chinese currency the Renminbi (RMB) and act as the spring board for London to also become a hub for RMB investment into China.

The agreements will reinforce London's role, in partnership with Hong Kong.

The agreement is the centrepiece of the conclusions of two-days of talks between the Chancellor George Osborne and his Chinese counterpart Vice-Premier Ma Kai as part of the Economic and Financial Dialogue (EFD) between Britain and China.

The fifth UK-China EFD was co-hosted by Mr Osborne and Chinese Vice Premier Ma Kai, and attended by senior officials from both countries. The last EFD took place in London in 2011.

In the joint statement following the meetings, Britain and China said:

"Both sides welcomed this as an important step that cements London's major role as one of the most important global centres for RMB trading."

London has already established itself as the Western hub for offshore RMB trading, as part of a partnership with Hong Kong and following an earlier agreement between Britain and China to support London as a RMB centre in September 2011.

Today's agreements lay the ground for the next stage of development for London's RMB market.

There are a number of elements to the agreement that will help secure this:

Firstly, investors will be able to apply for a licence to invest RMB directly into China, under a RMB Qualified Foreign Institutional Investor (RQFII) pilot. London will be the first place outside of greater China to have been granted an RQFII quota.

Until now investors from London have gone through counterparties in Hong Kong before being able to invest in Chinese shares and bonds, potentially leading to higher costs.

London's initial quota has been set at 80 billion RMB.

Secondly, the Prudential Regulation Authority will begin discussions with Chinese banks in London to enable them, for the first time, to apply to establish wholesale branches in the UK, allowing them to scale-up their business activities in the UK.

The move is a significant development for Chinese banks, the five biggest of which already have a London presence. 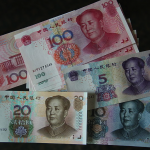 "A great nation like China should have a great global currency.

London's RMB market is the most active RMB centre in the world outside of Greater China and is the first G7 country to agree a RMB swap line with China.

London now accounts for 62% of global RMB trading conducted outside of China and Hong Kong, and 28% of all international RMB payments are made in the UK (the most outside of Hong Kong and Mainland China) surpassing Singapore.