Demand for children’s nursery services in the UK moved upwards in 2012/13 as marginally more children attended nurseries during the year, and nursery groups serviced a larger share of the market, according to the latest data from healthcare market intelligence provider Laing & Buisson.

Findings published in Children’s Nurseries UK Market Report 2013* show that the children’s nurseries market in the UK was worth £4.6bn in 2012/13, increasing by 2.7% in real terms from calendar 2011. This boost is attributed to a rise in total children attending nurseries (up 1.6%), and longer average attendance of children than in the previous period. There was no real growth contribution from prices, however, as nursery fees increased by just over 3% on average in 2012/13, matching economy inflation (RPI) over the period.

The report highlights that market growth in 2012/13 was driven by stronger demand from the under 3s, as penetration of the under 3s population by children’s nurseries moved up to 11.5% at June 2013, the first increase since 2007 when coverage was much higher pre-recession at 14%. The government’s wider funding of places for two year olds has partially contributed to this, though equally demand for under 2s strengthened in 2012/13.

Meanwhile penetration of 3 and 4 year olds by children’s nurseries fell during the year, moving from 18.8% to 18.4% thanks to increased competition from schools, and a decrease in local authority unit funding of this audience (up only 1.4% on average between March 2012 and June 2013, therefore representing a real term fall).

Capacity within the nursery sector expanded during the year through an increase in the average size of nurseries, now at 47 places, although the total nursery stock did not increase. Some 325 nursery groups (those with three or more nurseries) operating in the UK accounted for 22.7% of capacity at June 2013, increasing from 21.8% at March 2012, confirming that further corporatisation within the children’s nursery market is driving capacity growth. Average occupancy of nurseries operated by groups, measured at 81% at June 2013, edged higher in 2012/13, and compares to an overall average of 80% across all nurseries.

Looking ahead, Laing and Buisson estimates that a government funding injection focused on the lowest income households to subsidise part-time places for up to 40% of two year olds by September 2014, has the potential to lift volume demand by 10%-15% for nurseries overall – or up to 90,000 two year olds. Such a ratchet in demand from two year olds, however, will be dictated by the adequacy of local authority funding as the government’s direct subsidies become a larger portion of income which nurseries generate. 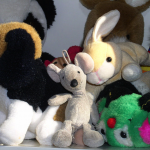 Toys for children by Arent

Author of the report, economist Philip Blackburn commented on future prospects for the sector:

‘Any growth is good news, and it is pleasing to see that penetration of under 3s has stopped declining, including for both 2 year olds and under 2s. And further increased penetration is guaranteed going forward, as nurseries take in more 2 year olds which receive government funding. However, at the same time migration of 3 and 4 year olds to the schools sector or elsewhere is likely to be a concern, particularly given government plans for a lighter early years regulatory requirement for schools to encourage their wider coverage across the whole day for 2,3 and 4 year olds. It remains to be seen whether schools’ early years appetite increases significantly, particularly when the children’s nursery sector provides sufficient high quality provision for the under 5s in a very competitive marketplace.’

He added: ‘Our findings suggest that business optimism within the children’s nurseries market has improved, underpinned by a more favourable economic outlook in 2013, strong corporate funding of nursery services by employers and employees (through childcare vouchers), which now accounts for 31% of market value, and forthcoming funding increases from the government both indirectly through higher childcare contributions under the universal credit, and directly through additional subsidised places. Certainly investors in nursery businesses have become more confident, as more nursery groups have recently secured funding for expansion and development, and new investors look to make their mark in a sector with a positive corporatisation rate.’

‘However, it is a sector where regular and ongoing political and regulatory changes may have a significant impact on prosperity, and seemingly a new battle on either funding, staffing, or quality is never far away from the headlines.’

HNWs and Londoners confident new-look Government will make them RICHER