The latest house price index from the Halifax puts the price of an average house in July at Â£161,094.

This represents a drop from the previous month of 0.6% as well as an annual fall of 0.6%. The average house price remained unchanged when looked at on a quarterly basis.

As can be seen from the graph below (which please note is expanded along the price axis) house prices have been fairly stable for the last year or so, possibly showing an overall slight trend down. Halifax points to the stable ratio between supply and demand over the period as an explanation for this. 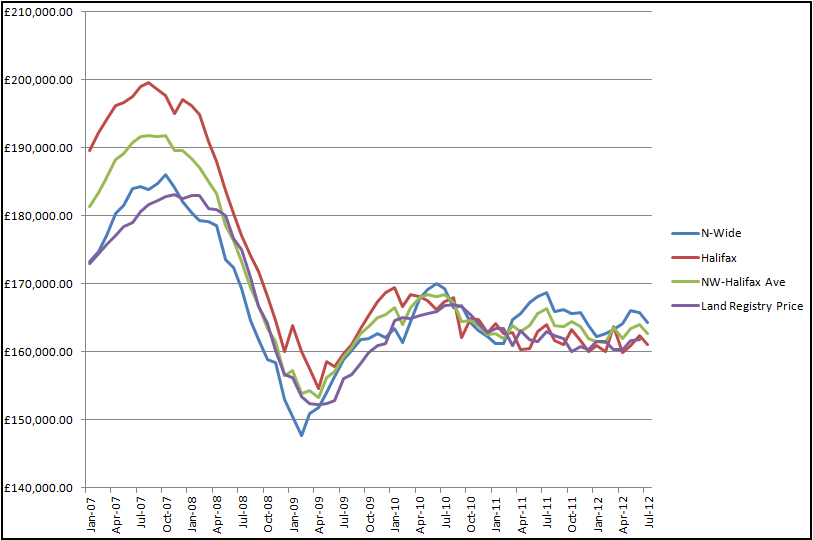 "The underlying trend in house prices was flat in the three months to July compared with the previous three months. House prices fell by 0.6% in July following consecutive increases in May and June as prices continue to fluctuate on a monthly basis.

"At a national level, house prices have been very stable over the past year or so. This can largely be explained by the static nature of supply and demand conditions during this period. Looking forward, we expect little change in prices over the remainder of 2012 so long as the economic climate in the UK does not worsen substantially."

But this delicate balance could so easily be upset; either the economy will recover and high loan to value mortgages will once more become widely available so boosting prices, or the economy could falter leading to job losses and ultimately forced sales. Which would you think is the more likely?

But then, in the case of the former the government will whoop for joy, if the latter then the banks will be ‘asked’ by the government to sit on their hands and not take possession of homes too readily and bail-outs and stagnation will continue for years.

Now which of those three scenarios do you really think will unfold?

One aspect of the current housing market does continue to astound me is the ever upward trend in property asking prices compared to the actual prices achieved by sellers.

Taking the Rightmove average asking price and dividing it by the average of the Nationwide and Halifax average house prices we see a continuing upward drift. 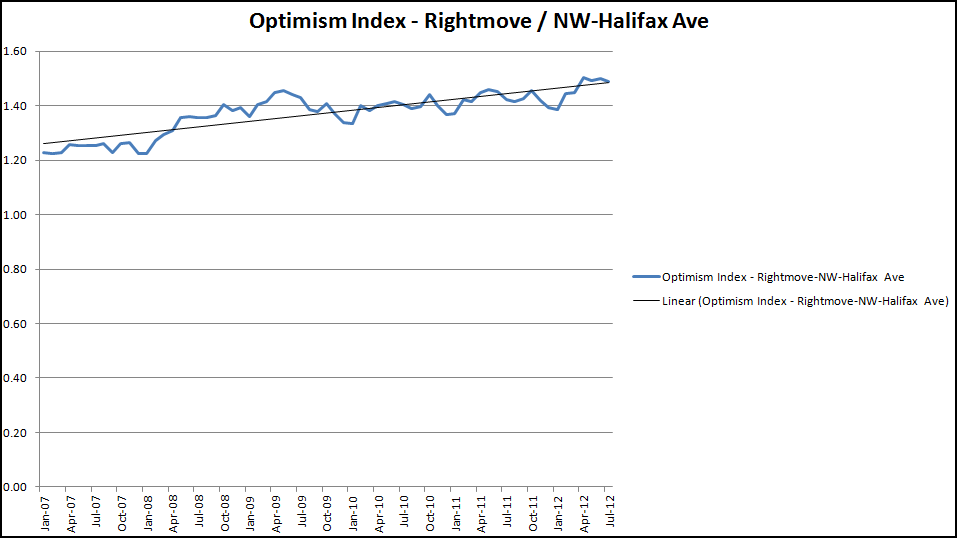 As can be seen asking prices are now, on average, 49% higher than prices achieved. So buyers are achieving savings of nearly a third off what the seller and/or the agent is asking for.

This means that sellers are becoming more and more unrealistic when putting their houses on the market and this may well be a contributory factor when many people look at the market and think that they will never be able to afford a house to live in.