The US, France and Britain have suggested that Germany’s gold reserves should be used as collateral for the Eurozone’s bail-out funds, but Germany’s Federal Minister of Economics and Technology, Philipp RÃ¶sler, has said that German gold reserves ‘must remain off limits’.

This backs up earlier assertions by the Bundesbank and Angela Merkel’s spokesman, Steffen Seibert, rejecting the proposal put forward at the G20 meeting to sell €15 billion worth of the country’s 0ver 3,000 metric tonnes of gold.

The German response from one of Angela Merkel’s senior politicians, Gunther Krichbaum, was that Italy should sell some of its own gold to pay down some of its huge debt pile.

As can be seen from the gold holdings widget, Germany is the third highest holder of gold at over 109 million ounces (about 3,100 tonnes).

But Italy holds the world’s fifth largest stock of gold at over 77 million ounces (about 2,200 tonnes). Discounting the IMF, Italy is number four on the list of countries holding gold. 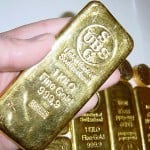 But, it’s all well and good talking about selling it but you have to have your hands on it to do so.

Central banks have always been a bit shy of audits and stating exactly where their gold is and, if some reports are to be believed, the countries that own the gold may only hold it on paper. It is rumoured that the bulk of Germany’s gold is held by the New York Federal Reserve Bank.

And why hasn’t Italy come forward and sold some of its gold? Especially as the price is quite good at the present. After all, that’s what reserves are for isn’t it?

Be Careful: Russia is Back to Stay in the Middle East