Has Cameron woken up to the mess we're in?

Whether or not David cameron has realised that the country is in a mess his days are numbered. Why? Because he forgot the first rule of modern British Politics – bribe the electorate, don't bollock them.

The PM has lambasted British workers for not having the skills or the 'can-do' attitude for today's workplace that immigrant workers are showing.

The latest employment figures indicate that 15 percent of workers in Britain are foreign and that is borne out said Mr Cameron at Oxford's Mini car plant 'You can go to factories in our country where half the people come from Poland, Lithuania or Latvia. You can't blame them, they want to work, they see the jobs, they come over and they do them' he said.

He went on to say that he wanted sensible curbs on immigration, especially from outside the EU (knowing full well of course that he has absolutely no control over immigration from within the EU). He also said that he wanted to get the education system 'right' so that we produce youngsters capable of doing the jobs available.

Then of course the old chestnut of reforming the welfare system so that work pays. 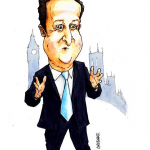 We of course like to believe that we live in a 'civilised' country with a huge welfare state whereas, as far as I understand it, many of these keen workers from abroad come from countries where there is not such a 'generous' system in place so they may well be used to working hard for a living.

No wonder then, some say, that UK employers are snapping them up in favour of indigenous workers.

But when the EU forces us to give every EU worker access to the exactly the same benefits as we are struggling to keep in-house we will probably have to change the laws to restrict welfare to all. i.e. a race to the bottom, which will include those born here.

The only way to maintain a welfare system of our choice and to get our people to work is to leave the EU. Just think what will happen to UK wages when the cheap labour spigot is turned off. But this of course won't happen as big businesses want maximum immigration so that as many wage packets as possible are set at the minimum wage – that way lies prosperity, for them at any rate.

How can we show children the benefits of working together?