As from June 2010 Rupert Murdoch's The Times and The Sunday Times started charging for viewing on-line content. But has this been a successful venture for the controversial media tycoon?

Quoted in the Guardian, the News International chief executive Rebekah Brooks said at the time "This is just the start. The Times and the Sunday Times are the first of our four titles in the UK to move to this new approach. These new sites, and the apps that will enhance the experience, reflect the identity of our titles and deliver a terrific experience for readers. We expect to attract a growing base of loyal customers that are committed and engaged with our titles."

There were arguments on both sides with the Murdoch camp saying that people would seek out the excellent news content he provided and be prepared to pay the luttle extra. Other said that his publications would haemorrhageÂ  readership and that other free providers would benefit.

The whole subject of course revolves around profit. How much does it cost to provide the news and how much can you get back and make a profit with via advertising and subscriptions.

There hasn't been much said on the topic in the last few months so one supposes that the industry is watching closely to see if Rupert Murdoch jumps back to free online material or follows through with his initial plans for paid content of his other publications.

This is not the ultimate analysis by any means but I decided to take a look at the Alexa internet 'reach' rankings of The Times, The Independent, The Guardian and The Telegraph compared on one graph. I know it is UK based but I wanted to compare like with like as much as is possible in the global world. The resulting graph makes for interesting viewing. 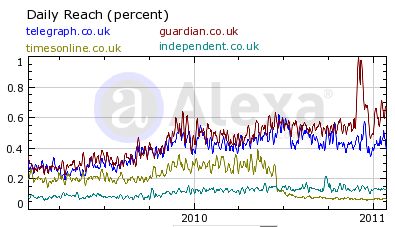 As you can see, after the grand pay wall was erected, the reach of The Times drops off markedly and continued to slide for several months to reach something of a stable bottom. But, and it's a big but, the other 'papers reach continued as if nothing had happened, apart that is from the Guardian during the initial days of the 'wikileaks' affair when they had semi-exclusive access to the material.

That would indicate that many internet news readers may be loyal to the sentiments of a particular outlet, but like to browse them all to get an overview. That is they do not exclusively view one site. So overall fewer news pages may now be being viewed.

The losers here then may be the advertisers who get less exposure for their wares and brand names by 'page impressions' of their ads.

The problem for The Times is that, by not appearing in internet viewers' faces at every turn, they lose brand exposure. People do need a taste of what they are missing in marketing terms.

It will be interesting to see which direction News International end up taking.