The perceived wisdom around the world has so far been that of course those American politicians will do a deal, even if just in time.

But as the sands of time run out and the sides involved appear to get more entrenched, the world’s markets and the American people are now starting to sweat.

Both Democrats and Republicans are aware of the stakes involved. They know they need to raise the debt ceiling to allow the US to keep paying its way. They also know that they have to reduce the deficit so as to keep the debt mountain from growing too much higher. But they both believe they have compromised enough in trying to broker an agreement.

The Democrats want to tackle the deficit by raising taxes, the Republican ‘Grand Old Party’ (GOP) wants to slash the size of government and the welfare bill.

Obama, although a Democrat, is probably the person people will blame if no deal is reached. “Today I urge Democrats and Republicans in the Senate to find common ground on a plan that can get support from both parties in the House, a plan that I can sign by Tuesday,” he said. “There are plenty of ways out of this mess, but we are almost out of time.”

He also said that both sides aren’t as far apart as it would seem. They agree roughly on the sums that need to be found, it is just how it is done.

Just to add to the tension the US Commerce Department gas come out and said that US GDP rose at an annual rate of just 1.3% from April to June, which is a lot lower than the predicted 1.8%. And consumer spending could only manage a meagre 0.1% increase. 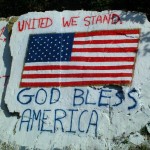 Even with all of this US politicians, possibly fuelled by their more strident supporters, are still willing to take it to the wire.

And anyone looking to China to provide the engine of global recovery and save us all will have been disappointed by the latest HSBC Purchasing Managers’ Index, which fell from 50.1 in June into the negative territory of 48.9 in July. There is still a debate about whether China will have a hard or soft landing [1].

Then to top it off the state of European finances are a woeful tale of a well aligned set of dominoes.

But for a crisis that threatens to engulf us all in a new ‘great recession’ we all seem to be content to let the US get on with it.

Christine Lagarde the new head of the IMF has made some noises recently and the Chinese state owned press is now making comment. But for a financial crisis that could engulf us all it appears very little.

Contrast this with the abandon with which the world’s politicians poke their noses into the affairs of smaller countries, such as the infamous PIIGS.

That is unless they are all relatively comfortable with the way things are panning out in the US of course. Or they realise there is absolutely nothing they can do or say and don’t want the rest of us to know.

Two days is a long time in economics