Heathrow Hub, the independent, innovative proposal to double the available capacity at Heathrow while also reducing noise, has today launched a nationwide advertising campaign to ensure its proposals are heard by all those interested in the future of Britain’s airport capacity.

Under the banner “The plan for a quieter Heathrow expansion that isn’t being heard”, Heathrow Hub has taken out a full page advertisement in the Sunday Times; and subsequently the advertisement will appear in The Daily Telegraph, The Times, CityAM and the Evening Standard.

The Heathrow Hub concept proposes extending the existing Heathrow runways to the West and then splitting them to create four, thereby doubling the number of slots. It also proposes building a new rail and passenger interchange on identified land just to the north of Heathrow. The facility would at last connect Heathrow to the national rail network via the Great Western Mainline and Crossrail, connecting regional towns and cities to global markets and providing an integrated transport solution for the whole country, not just London.

A submission, with technical work led by URS – a leading provider of engineering, construction and technical services for public agencies and private sector companies around the world – has been made to the UK Airports Commission. The entire project could be built for an estimated £12.5 billion, to be privately funded. 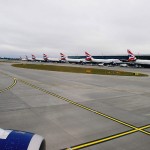 Captain William ‘Jock’ Lowe, the longest serving Concorde pilot, and Mark Bostock, a former director of Arup who promoted and developed the HS1 Channel Tunnel rail link alignment, lead the team behind Heathrow Hub. The concept is very different to and entirely separate from Heathrow Airport Ltd’s plan for a third runway, not least because it brings no new households into the airport’s noise footprint.

Jock Lowe said: “Expansion at Heathrow is vital for the economy and we believe this independent, innovative proposal is the most cost effective and practical solution to the issue of Britain’s aviation hub capacity. It also has the merit of being quieter by not building the ‘third runway’ and adopting noise reduction measures. We have embarked on this advertising campaign in the hope the proposal is properly understood by all those interested in the future of Britain’s aviation capacity.”

Heathrow Hub was also the subject of a recent report entitled “Double Up On Heathrow” published by the Centre for Policy Studies available at http://www.cps.org.uk/.

The fickle world of Forex

Highest ever number of achievers from overseas in CISI 2014 Awards