So we all know who the eighth monarch in our timeline to go by the name of Henry is? Good!

Henry VIII is normally depicted in history books (or more so the net technology, who’d have it?) as a large man in Tudor dress sporting a beard. When we think of Henry we see the dissolution of the Catholic Church, one of his largest royal actions. No? Ok his 6 wives I know. 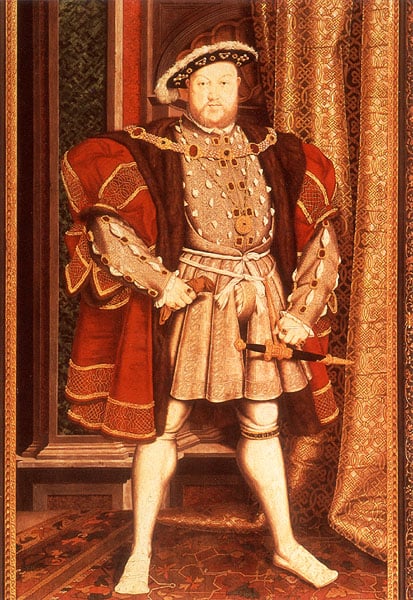 But I suppose they do fit together, as it was the inability to divorce one of his queens that led him to act so drastically towards the church. The Church of England, being the end result of his marital disagreements. Henry's first wife was the widow of his brother Arthur, his elder brother in fact who died at the young age of fifteen. This helped seal an alliance between England and Spain as Catherine of Aragon was the daughter of King Ferdinand II and queen Isabella of Castile. To make this marriage possible both parties had to ask the pope then Pope Julius II to grant dispensation to avoid religious havoc. In the book of Leviticus it states that if one were to marry his brother’s wife they will remain childless. So to get the popes approval and to avoid claims of affinity, Catherine of Aragon claimed that her marriage to Arthur had not been consummated, although sexual intercourse was normally the act which confirmed a Tudor marriage!

Catherine of Aragon's marital bliss was short lived as we saw the two divorce shortly after.

We then saw (although not personally):

Anne Boleyn beheaded, Jane Seymour die, Anne of Cleves beheaded, Catherine Howard die and his 6th and final wife Catherine Parr outlive the monarch to be buried as a peasant in a pauper's grave.

So we are all aware that Henry VIII was a man who took action, a man who was strong-minded and willing to see the death of his own wives. Although, not many of us are aware of his love for verse!

It is said that the folk song ‘Greensleeves’ came about during Henry’s courting of his second wife Anne Boleyn. Henry had many a trouble trying to convince Anne Boleyn to become his queen. In hopes of wooing the pending victim of decapitation, Henry took quill in hand and penned the lyrics that we have seen put to music, becoming Greensleeves long after his death. The title Greensleeves we believe came into being as Anne Boleyn was a lover of green and like most Tudor women, wore long sleeves that covered the wrists.

Henry’s poetry led to a trend emerging within the Tudor courts where a knight would often uses poetry to woo his woman. Many a poet would find pay by writing poems to sell to knights of the realm to use as their own in hopes of obtaining their sweetheart’s hand in marriage.

The early court of King Henry VIII was summarised by himself in verse:

I love and shall until I die,

Grudge who lust, yet none deny,

So god be pleased, thus live will I.

For my pastance, hunt and sing and dance,

My heart is set;

All goodly sport to my comfort,

Youth must have some dalliance

Of good or ill some pastance;

All thought and fancies to deist;

For idleness is chief mistress

Then who can say, but mirth and play

Is best of all.

Is virtue, vices to flee;

Company is good or ill,

But every man hath his free will:

The best ensue, the worst eschew;

My mind shall be

Virtue to use, vice to refuse,

Thus shall I use me."

The poetry of the early period was collected and made into an anthology of Tudor works, namely Tottel's Miscellany. Although, sadly, many of the works were not of much quality. We also saw evidence of satire used within the kingdom in Skelton’s works but these were also not of much value to the reader.

We see more evidence of poetry in King Henry’s courts upon the remarriage of his sister Mary to the duke of Suffolk, Charles Brandon.

This is shown within a painting of the wedding, where we see a fool of the court whispering into the duke’s ear;

"Cloth of gold do not despise

Though thou be matched with cloth of frieze;

Cloth of frieze be not too bold

Though thou be matched with cloth of gold."

The wedding itself must not of been very enjoyable for the duke as he was amongst many guests who had been keen to see his execution. Suffice to say the party was kept very low key!

During Henry’s courting of Anne Boleyn he had a competitor in the form of poet Thomas Wyatt. The two had many dispute, it was said that Boleyn encouraged the poet’s advances. There is not much evidence of the relationship between himself and the soon to be queen of Henry. I am guessing that Anne Boleyn is currently kicking herself for not choosing the hand of Wyatt, as her lifespan would have been much greater!

One of the four pieces we see written by Wyatt is as follows;

“What word is it that changeth not,

Tho' it be turned and made in twain?

It is mine Anna, god it wot,

And eke the causer of my pain,

Who love rewarded with disdain."

Although, Wyatt gave up on his advances after finding another woman upon which to focus his verse, which may have been Elizabeth Darrell who he was later involved with.

Throughout the reign of the famous Tudor monarch there are many more examples of poetry. Had the king not been so passionate about the pastime one wonders whether there would have such early examples of verse?

Suffolk also wrote his fair share of rhyming lines of language. One example we see is his epitaph for Henry Howard Earl of Surrey upon his death following a journey to Falmouth at instruction of the king which he sadly did not complete;

"A tongue that serv’d in foreign realms his king,

Whose courteous talk to virtue did influence

Each noble heart; a worthy guide to bring"

So, Henry was not the hard man we all believe him to be. He was indeed a good and very popular king with a much softer side. He became the muse of many a Tudor poet.

So to Henry I say;

Thou art a monarch of virtue,

A king who saw six wives,

We often speak of you,

And how cousins Howard and Boleyn, at thou hands died,

Yet many doth not know,

Many doth not see,

The inner monarch whom so chose,

To practise prose and poetry.