He’s not the Messiah, he’s not even a very naughty boy, he’s just a bit of a lefty

Here is the news for the media and the Blairites – Jeremy Corbyn is the new Labour leader, elected with huge support from all sections of his party, except for the parliamentary Labour party. Which raises the immediate question: just who are the out of touch dinosaurs?

The torrent of media frothing and furious briefing against the new leader is actually just a continuation of what the right of the Labour party and the media did to ensure Ed Miliband would never become PM from day one of his tenure as leader. And what did they achieve? The election of the most left wing leader of the party for over 30 years, with a huge mandate for change. So if the Blairites want to blame anyone for ‘Corbynmania’ they need look no further than the nearest mirror.

Personally there are a number of Corbyn’s ideas I don’t support, but I know two things – he’s not a as far left as he is being painted and, more importantly, the people will now be given the opportunity to hear an alternative view to the right-wing-only rhetoric they have had piped directly into their brains for the past twenty years from both the major parties via the media. But here’s the thing the Blairites cannot grasp – winning isn’t everything and you can affect change from the Opposition benches as well as the Government ones. All that Labour positioning themselves just to the left of the Tories has done is deliver the most extreme government elected in Western Europe since World War II.

So how did we get here? We hear a lot of how Blair won three elections, but the Labour Party lost 3 million votes between the 1997 and 2001 elections, and then suffered a further 6% drop at the 2005 election and the Blairites have been at pains to understand the reasons why, which are of course are all too obvious to everyone else – people never wanted Tory-lite. Yes Blair won three elections, but that was off the back of grudging support, mistrust of the Tories and support for the incumbent. So when the economy finally hit the skids people couldn’t wait to either switch their vote to another party or to not vote at all. 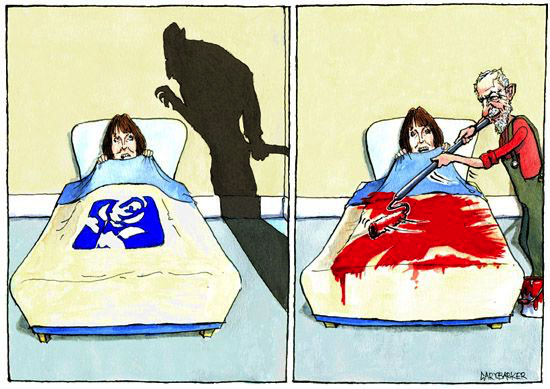 Corbyn’s election has now created a buzz in politics not seen since Cleggmania, only this time the furore has split the nation between doomsayers and messiahbots. The former seem oblivious to the fact that all they are doing is making themselves sound like spoilt brats sulking at not getting their own way and the latter are in danger of resembling the followers of the Reverend Jimmy Jones.

My take is we should welcome this result for what it really is: an opportunity for us to not only see clear red-blue water between the parties, but also a refreshingly open and unselfconscious politics that cares less for what the media thinks than the electorate.

The inconvenient truth is that all it took for the media to win the last election for the Tories was a bacon sandwich and they wouldn’t have given whoever won the leadership election a fair hearing. Corbyn knows this and also knows better than anyone the media onslaught that lies head for him, with not only columnists and headline writers ferociously spinning their negative bile, but they will be ably assisted by the sulky Jeremiahs in his own party. His family have already suffered their vile attacks and this has quite rightly led to Corbyn, for now, unwilling to offer his head up for a hammering from the stuck record Labour bashers at the BBC and SKY.

My advice to the doomsayers: grow up, democracy isn’t just for when you get your own way and to the messiahbots: don’t drink the orange juice.