We expect American consumers to do a lot in this country; not least of which is to be the nation’s economic engine, after all, 70% of our gross domestic product (GDP) comes from consumer spending.

After years of strong stock market gains, America is still being bogged down with stagnant wages, high unemployment, and near-record-high food stamp usage—not the best formula for a nation that relies on consumers to spend, spend, spend. However, it is also contingent upon us being able to continually pay our bills. It’s the ebb and flow of consumerism.

But that flow is becoming more and more constricted. While banks are more than willing to increase high-interest credit card and loan limits to maxed-out consumers, they’re beginning to fear that this money might never be paid back.

Despite these findings, the report also found that consumer borrowing (and spending) shows no signs of slowing down! In fact, 58% of bankers said they expect the average credit card balance to increase over the next six months—only six percent expect balances to go down. On top of that, 44% of polled bankers say they expect the amount of credit extended to consumers to increase—only 14% think it will decrease.

These findings run in step with data from the U.S. Department of Commerce, which shows consumer spending increased throughout 2013. In November, discount-hungry shoppers sent consumer spending metrics up 0.5%—the most in five months. This came on the heels of a 0.4% gain in October, which was higher than was previously forecast. At the end of the third quarter of 2013, total consumer indebtedness was up 1.1% quarter-over-quarter at $11.28 trillion.

While consumer spending helps start/keep the U.S. economy chugging along, this is only beneficial if jobs are plentiful and incomes are on the rise. An increase in consumer spending as a result of borrowing due to high unemployment and sluggish wages suggests American families are borrowing to make ends meet—one points to sustained growth and consumer confidence; the other doesn’t. 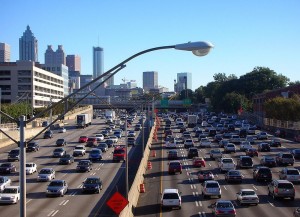 Traffic by Atlantacitizen at the English language Wikipedia

Increased debt loads to purchase new vehicles have helped a number of auto manufacturers report strong auto sales. In 2013, retail auto sales for Ford Motor Company (NYSE/F) in the U.S. were up 14% percent overall, with car sales increasing 12% and trucks up 17%. These numbers make Ford the best-selling brand for the fourth consecutive year. Perhaps more impressively, Ford China 2013 wholesale auto sales soared 49% in 2013; auto sales were up 35% in December alone!

General Motors Company (NYSE/GM) expects auto sales profits to rise in 2014 on the heels of auto sales growth in the United States, China, and Europe. The company also expects auto sales to accelerate in Europe as it strengthens its brands in the mainstream and premium segments.

While banks expect credit card and auto loan delinquencies to increase in 2014, that doesn’t mean U.S. auto manufacturers are in for a bumpy ride in 2014. Instead, thanks to a strong international presence, U.S. car makers should report solid auto sales this year.

The True Cost of Data Loss